As a continuation to yesterday's post, shortly after I published the post, there was fireworks going on just outside the B&B window.  Something about Saint Marie which since I'm not religious, I don't quite understand.  All I understood was that it was going on for 30 minutes outside the window from around 10:30pm - 11:00pm.  They were very nice though.  Actually, even the day before, there were fireworks, not quite as crazy as last night's, but still good.  Also just outside the window of our B&B.  Good choice!

Since the day was clear, we decided that we would go to Mount Vesuvius.  In order to get there, you still go to the Pompei Scavi train stop.  When you get there, exit the train station and head left, there should be a bus (unless it has left) and a booth there that sells tickets to Mount Vesuvius.  It costs 22 euros at this time and includes admission as well as a brief explanation of Mount Vesuvius.  By going through this company, you actually go up through a private trail that is really bumpy but provides a great view of the city.  You are carried up the mountain by what looks like a military truck with monster truck sized wheels on it.  It looks pretty cool.  The entire tour is about 3 hours, 1.5 hours of which is just the ride up and down the mountain.  After you reach the parking lot, there is still about a 15 minute trek up to the top of the mountain.  So, 15 minutes up, 15 minutes down means that you have about 1 hour at the top.  I thought it would be enough time, but I think you need a bit more up there, depends on what you want to see and take pictures of.  All in all, a worthwhile experience.


As we were heading up the mountain, I noticed that the top of the mountain was actually covered by clouds, so I thought it would probably mean that we wouldn't have a good view of the city below and I was right.  Once we got to the parking lot, it was still pretty clear where we were, but as we started trekking up the mountain, it was like a scene in Silent Hill.  You can't see very far and suddenly behind you what you remember being a path, it disappears after about 5 meters.  After 15 minutes of me trying to taste what clouds taste like (you could see them moving), we made it to the top (clouds don't taste like anything unfortunately).  We met up with the guide who was to tell us about Mount Vesuvius and made our way around the cater, it was pretty cool.  You are able to see steam still coming out of little pockets of the volcano, although the bottom is completely covered now.  It has not erupted since 1944, meaning that there is now vegetation growing in the crater (even trees!).


We reached the end of the crater and looked at the time, 25 minutes left to wander back to the beginning, so we made a dash for it.  We originally started with 4 couples, and in the end, we made it back with 3.  For some people, I don't think the trek up to the top is possible within the time frame given.  We saw a few groups of people as we were leaving giving up on the trek up.  Since you couldn't see the top, you have this sense of 'have I walked at all'?

So, after the mad dash down to the bus, we made it back to the base and went to visit Pompei.  Pompei is 11 euros at this time for a huge city which was preserved since 79AD after Mount Vesuvius erupted and covered the city with ash.  Apparently they have only uncovered about 60% of the city at this time.

Having gone to Ostia Antica, I'm not sure what to say about Pompei.  It is a nice city, there are a few highlights including the amphitheater (opposite side of the entrance from the train station), the theater (fairly close to the entrance), and the brothel (I don't know if this was real or not, but it was interesting).  The brothel actually has preserved images at the top of the rooms.  These images depict the type of sexual orientation you desire (yes, that is correct).  It is a small but very packed place since there are a lot of people here.  Which reminds me, Ostia Antica is a lot less busy than Pompei.  I would say there is at least a 15-to-1 ratio of people.  The lack of buildings that you could climb atop of in Pompei was discouraging and a lot of the areas were actually under restoration, so you couldn't even see everything.  Whereas in Ostia Antica, there were quite a few buildings that has second, even third floors that you can climb up to and have a look at the city from above.  All-in-all, I would suggest doing one or the other but not both.  We spent about 3.5 hours in Pompei.  If we did not do Ostia Antica, we may have spent more time here.

Afterwards, we headed back to the B&B and took a nap.  After waking up, we showered and heading out for dinner.  There is a restaurant recommended by Rachel that is just across the street so we headed there.  Unfortunately it doesn't open until 8pm (what restaurant opens at 8pm?), so we wandered and hit up the gelato place that Rachel recommended.  It was pretty good, second gelato of the day.  After gelato, we headed back down to the restaurant since it would be open then.


The restaurant was very good.  Fresh ingredients, menu changes daily.  The waiter/chef was telling us about what was on the menu and we basically ordered everything.  Everything was very well done.  We had cannoli, penne with zucchini, fried smelt and some other fish as well as octopus.  Great meal to end the day. 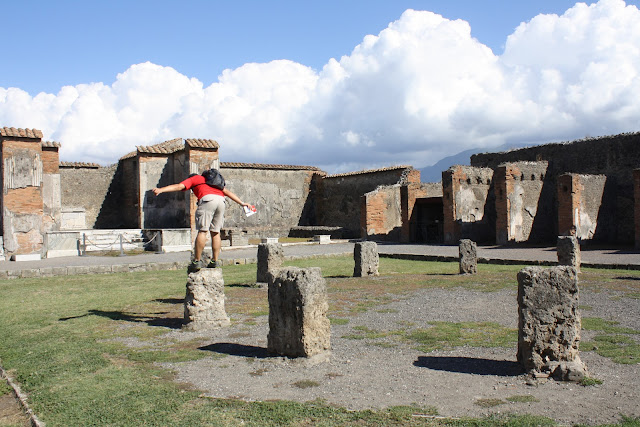 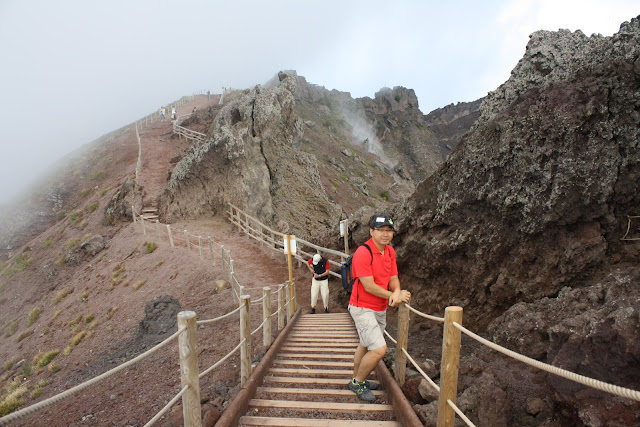