Glow Fresh Grill & Wine Bar (Shoppes at Don Mills)
To start the month, we met up with a bunch of my high school friends since one of them came back from Hong Kong.  This is the second time since she has returned (or at least that I know of), so it is a good chance to meet up.  It feels almost like an annual get-together where you meet up with old friends and talk about how things have been over the past year.  It seems like not much have changed, but at the same time, it has.  Many of us are now paired up with someone, which has expanded our group a bit.

The restaurant is nice, it seems rare to go to a restaurant that isn't dimly lit, so that was a nice change.  The place has a nice patio but we sat inside instead since we had 12 people and it was getting late before we even started (meet for 8pm, ended up starting at 9pm).  We noticed that they have an early dinner special which we may return for.  $15 for a 3 course meal between 4:30pm - 6:00pm Sunday - Friday.  The complimentary bread that we got was nice (we got regular white bread and an olive loaf).  There were THREE spreads, one chickpea, one beet, one spinach.  Everyone liked what they had.  Our meat was a little over cooked, but I think that's generally a problem when you have a table of 12.  Overall, it is a nice place and we would probably come back to try out some of the other dishes (or at least the desserts).

Thomson Park Memorial Park
My friends have an annual BBQ at this park and this was the first year that I have been to both this BBQ and this park.  So, I made an effort to come to this park early and have a look around.  I got a little lost while walking one of the paths and it just follows a trail and it just keeps going.  An hour and a half later I made it back to Thompson Park, but I ended up going through Bendale Park, Hague Park, McCowan Park and Knob Hill Park.  It is a nice trail, good for biking, saw a few bikers as well as a few joggers.  I think I saw either some groundhogs or some gophers, but I can't tell what they are, and apparently I took very blurry pictures because this is how they looked. 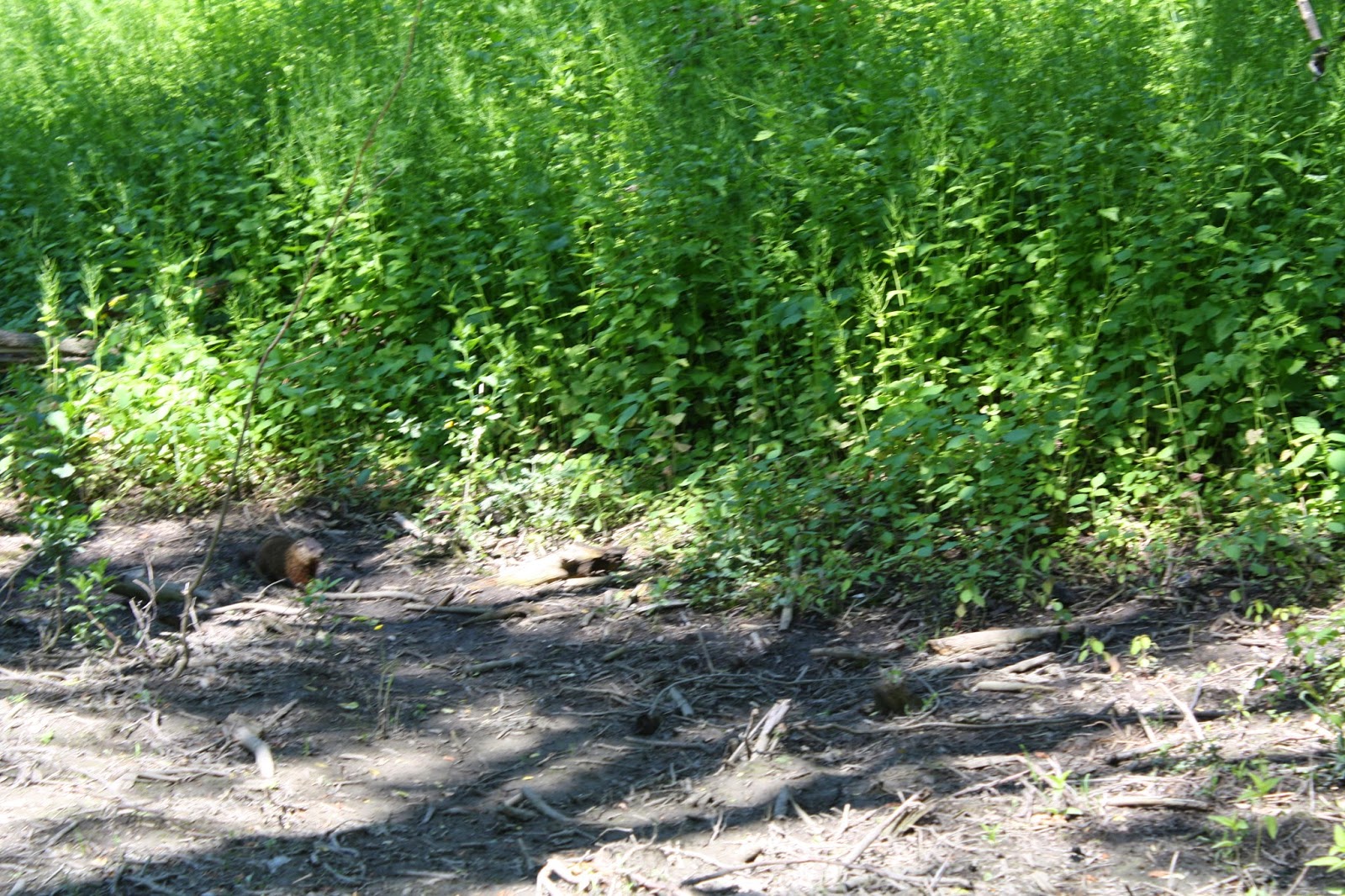 Fraticelli's
Meeting up with a friend for dinner and it was suggested that we go here.  I ordered the Spaghetti Carabonara and it was excellent.  Will definitely try to come again in the future.  The atmosphere is nice, while everything on the wall is white, the tables and ground were dark which gives you a sense that the place is dark, but you are able to see everything clearly.  If you go to their website, you can submit feedback and get a free appetizer for your next visit!

Scaddabush (Yonge / Gerrard)
Went here for dinner and it was pretty good.  Italian food, with a nice atmosphere, although if you aren't into music, you may not like this place.  We went on Friday and there was a live DJ.  The appetizers were really good.  In house made mozzarella, polenta fries (YUM!), calamari, and charity bread (the garlic butter is so good).  For mains we have the Zucca (butternut squash ravioli) which was really good although a bit sweet for me.  The meatball was really big (make a fist, that's how about big it is), although not as meaty as expected.  Everyone seemed happy with what they ordered and it wasn't very expensive which is always a plus.  You can sign up for their newsletter for a $10 off $30 coupon.

La Palette (Queen / Bathurst)
Nice little spot for dinner.  We went here for a mutual birthday.  Decor is okay, high ceiling, big bar.  The steak was really well done.  I'd come back for the steak!  Very good service, although since there weren't many customers, that may be why they were more attentive to us.  $35 fixed prix, 3 course meal.

Webster's / Tews Falls (Hamilton)
I thought it would be nice to head to the place that is called the 'City of Waterfalls'.  There are over 100 waterfalls!  First stop, Webster's and Tews.  This is a very nice spot.  Webster's Falls is located right at the parking lot, so I decided that we should go see Tews and see if we can go to Dundas Peak since we heard it was nice.  Tews is pretty.  Not a very big waterfall, but I liked that it wasn't a gushing waterfall.  This meant that you can actually see behind the waterfall.  This was also the first time that I tried out my new camera (Sony a6000) with a 55-210mm lens.  Today I learned that 55-210mm meant that the subject needs to be pretty far away.  The follow waterfall photo was as zoomed out as I could get.  Next time I'm bringing along the 18-55mm. 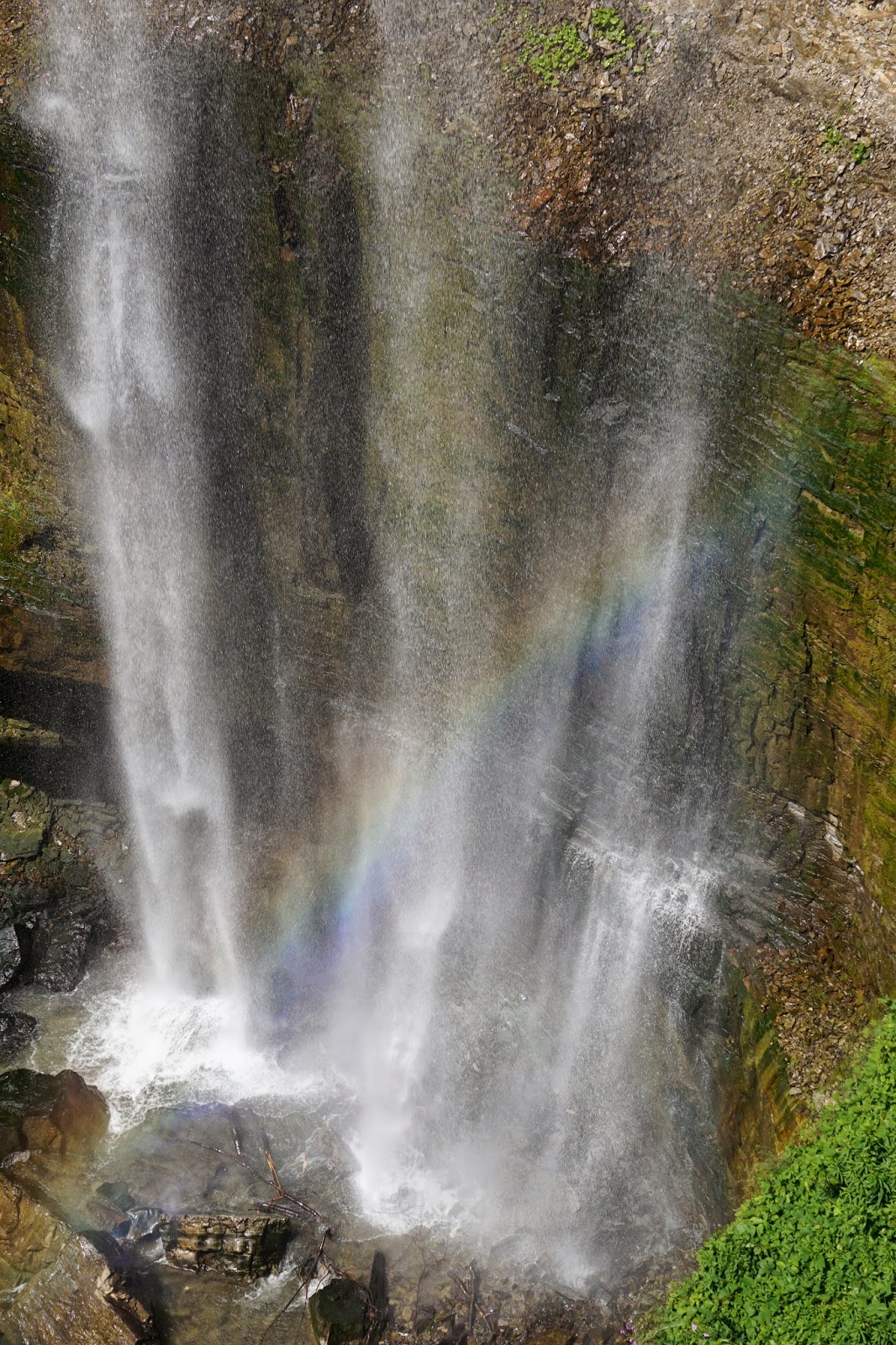 If you keep heading down the path, you will eventually get to Dundas Peak.  A very nice lookout that shows you a nice view of Hamilton and the conservation area.  This place is home to a few hawks or eagles (I don't know much about birds).  At this point, I was glad that I had the zoom lens, although I need to figure out how to use it properly. 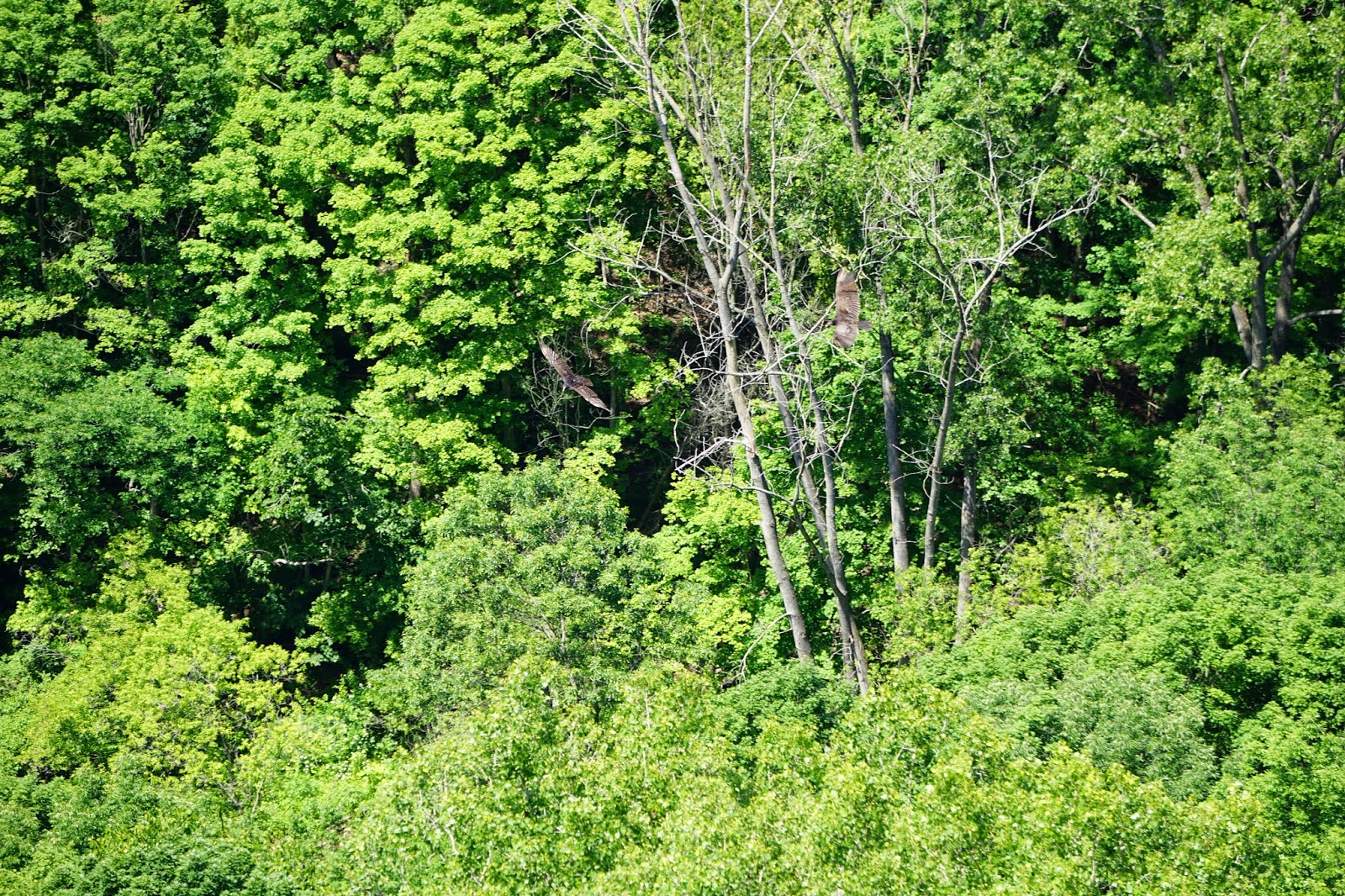 It was $10 to park here and the ticket is good for the area (or so I was told).  We took about 2 hours to walk the area (parking lot to Dundas Peak, back to parking lot, see Webster Falls and we left).  There is A LOT left if you wanted to do some more since it is connected to Crooks but since we were hungry we went for lunch (it was around 1:30pm when we left).  Here's a picture of the top of Webster Falls. 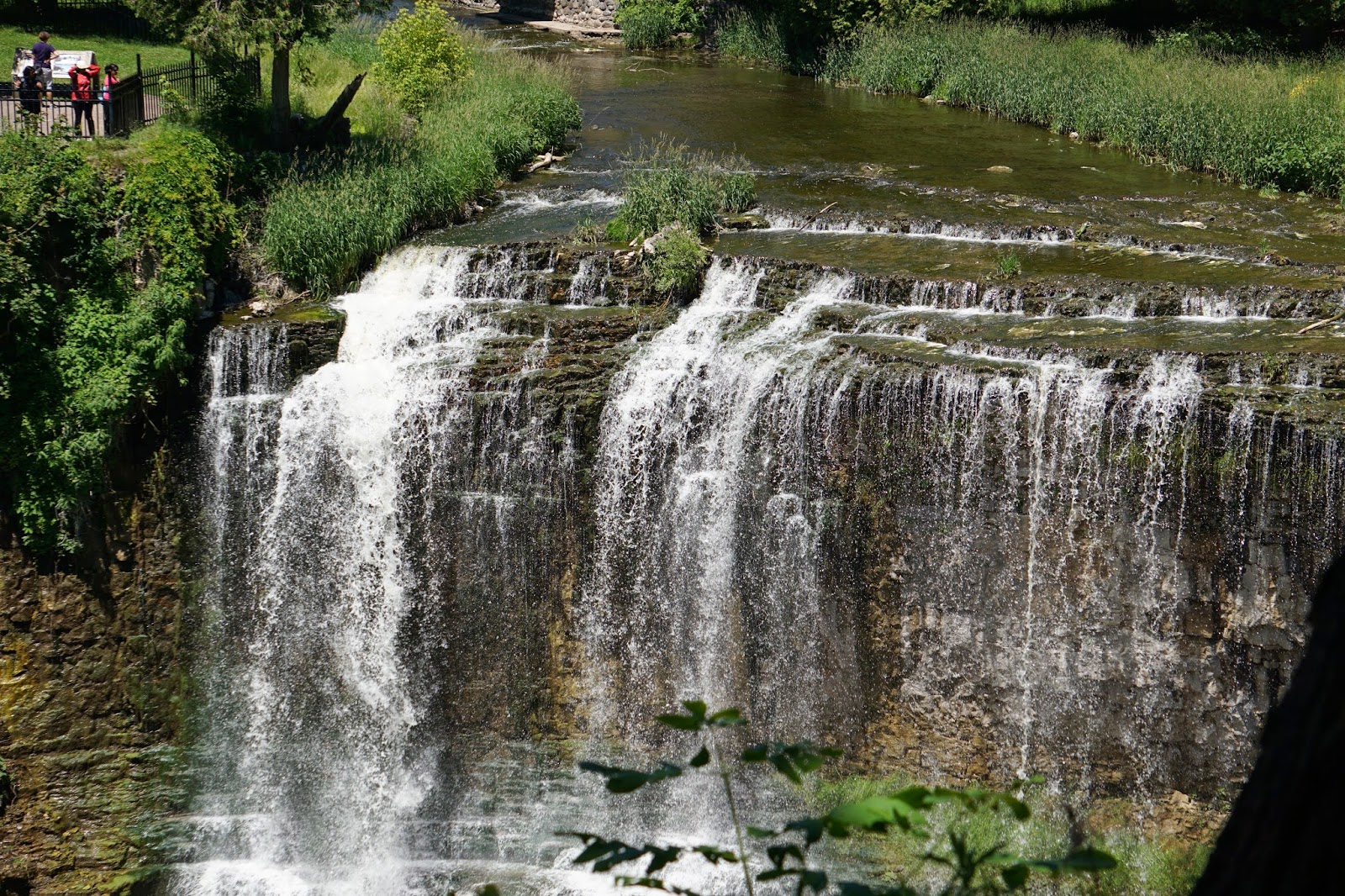 Two Cougars & A Cafe (Hamilton)
Went here for the name!  The restaurant was actually well reviewed, located in the industrial area so it was pretty quiet since we came on a Saturday.  The chicken strips that the others had were good and the eggs benedict that I had was good too.  Prices were reasonable as well!  The eggs benedict was $10 and the chicken strips with fries was $8.  Old school decor where they seem to put up random items along the wall.  I'd come back.

Devil's Punchbowl (Hamilton)
This was the place that we went to after lunch since it was nearby (10 min vs 20 min drive).  It looks like a giant hole was carved into this area.  It was pretty cool to see.  Unfortunately it is not really much of a waterfall.  There was VERY little water.  From the parking lot to the lookout is less than a 5 minute walk.  The hike itself will bring you all the way down and into the punchbowl itself.  This is also a VERY steep hike.  After you get to the bottom of the trail, it levels off, but the initial portion is pretty uneven with some steps being much taller than others.  We probably took about 1.5 hours to walk to the bottom from the parking lot and back.  Be prepared to walk up and down some fairly steep areas.  The parking lot was $2 hourly (unfortunately our slip doesn't work here).  Here's a photo of the top of the punch bowl with the 55-210mm zoomed out.  This lens is ridiculous for anything not crazy far away!  Imagine another 20 layers like this deep and in a U-shape.  The hike allows you to go to the very bottom. 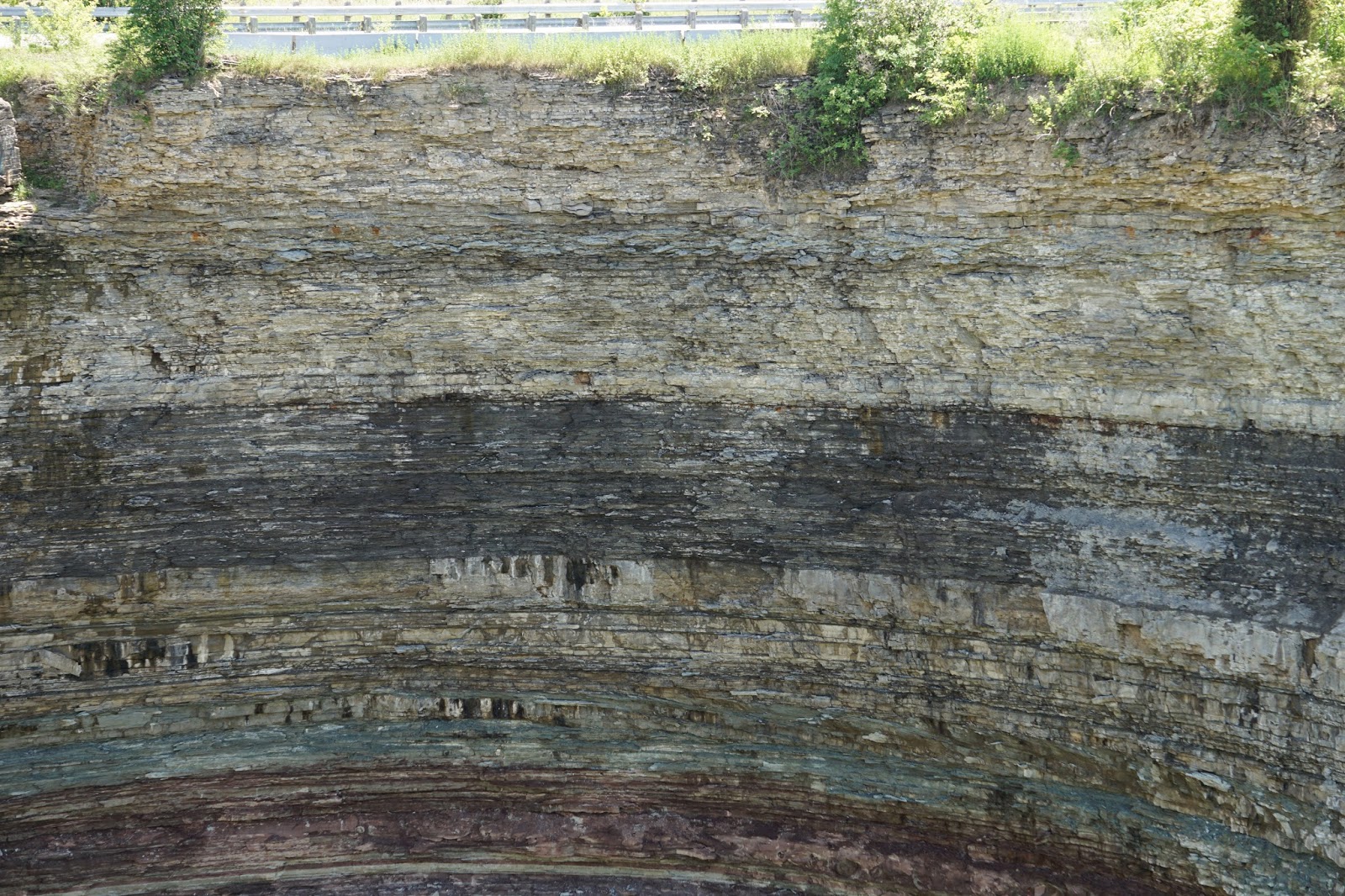 After the hike, we returned back to the car and headed to the local market (Punchbowl Market & Bakery) hoping to have something cold after the hike (I was sweating).  Unfortunately they did not have any ice cream, and the helper there couldn't even think of one close by (how is that possible!?).  So, we settled for some cold drinks and a raspberry square.  The raspberry square was delicious!  I don't know what is in it but it tasted really good (or things taste better after you have worked out).  Tracey even contemplated buying some to take home!  I'd recommend you stop by if you are in the area (it is just down the street, less than a 5 minute walk from the parking lot).  And for anyone who has kids or likes ride, there is a pony ride or a buggy ride next to the shop.

Angus Pho House (Yonge / Finch)
A somewhat new pho restaurant located near Yonge and Finch.  Not very large, can seat about 30 people.  Nicely painted walls, very simple menu.  Ordered the satay beef noodles and I enjoyed it. The meat was very nice, very tender compared to what I normally get at other pho restaurants.  It also wasn't crazy spicy which is always a plus for me.  Price is average for the area, $7.50 for a large (only comes in small and large).  I'd come back to try some of their other dishes.

Sheherzade (Bathurst / College)
A local Persian restaurant that a friend wanted to try, I figured why not.  It is a VERY tiny restaurant.  If you want to go, I would suggest getting reservations because there is only room for roughly 20 people and it was fully booked for a Thursday.  Nicely decorated interior with nice coloured tiles and some nice art.

Food was okay.  I let her decide on the food choices since it was her choice and I have been to Persian restaurants before.  We ordered the Dizi which is a 'two course' entree.  It was lamb with peas and bread.  The sauce from the lamb dish is separated into a bowl that you could use to dip your bread in and that was course #1.  Course #2 was the lamb itself which you have a masher to mash the lamb and peas together.  It came with two sauces (one was pickled peppers and one was yogurt).  We also had the kal kabob.  It was eggplant with walnuts, also served with bread.  Total after tip was $31.

I wouldn't come back, which is odd because my coworker likes Pomegranate which is the sister restaurant just next door.

July 2014 and beyond!
July has gotten booked up more than originally planned.  I will be going camping, attending a wedding, going to a cottage and some other things!  Check back in August for my July 2014 recap!
Posted by Wai at 4:17 PM No comments: