I decided to split up my month postings from everything that has happened in the month into two postings.  One for events / places and one for restaurants (fixed restaurants, not food festivals) that we visit.  This will keep it a bit cleaner when I look back at places that we have gone.

Scarborough Ribfest (McNicoll / Kennedy)
Located at a local park, we headed to ribfest with Mike and Christina for lunch.  Having never been to a ribfest before, this would be my first and I was interested in seeing what it would be like.  The one in Scarborough takes place at L'Amoreaux park.  There is PLENTY of parking here (I was silly and stopped by the first available parking lot when I could have just parking right at the main ribfest parking lot). 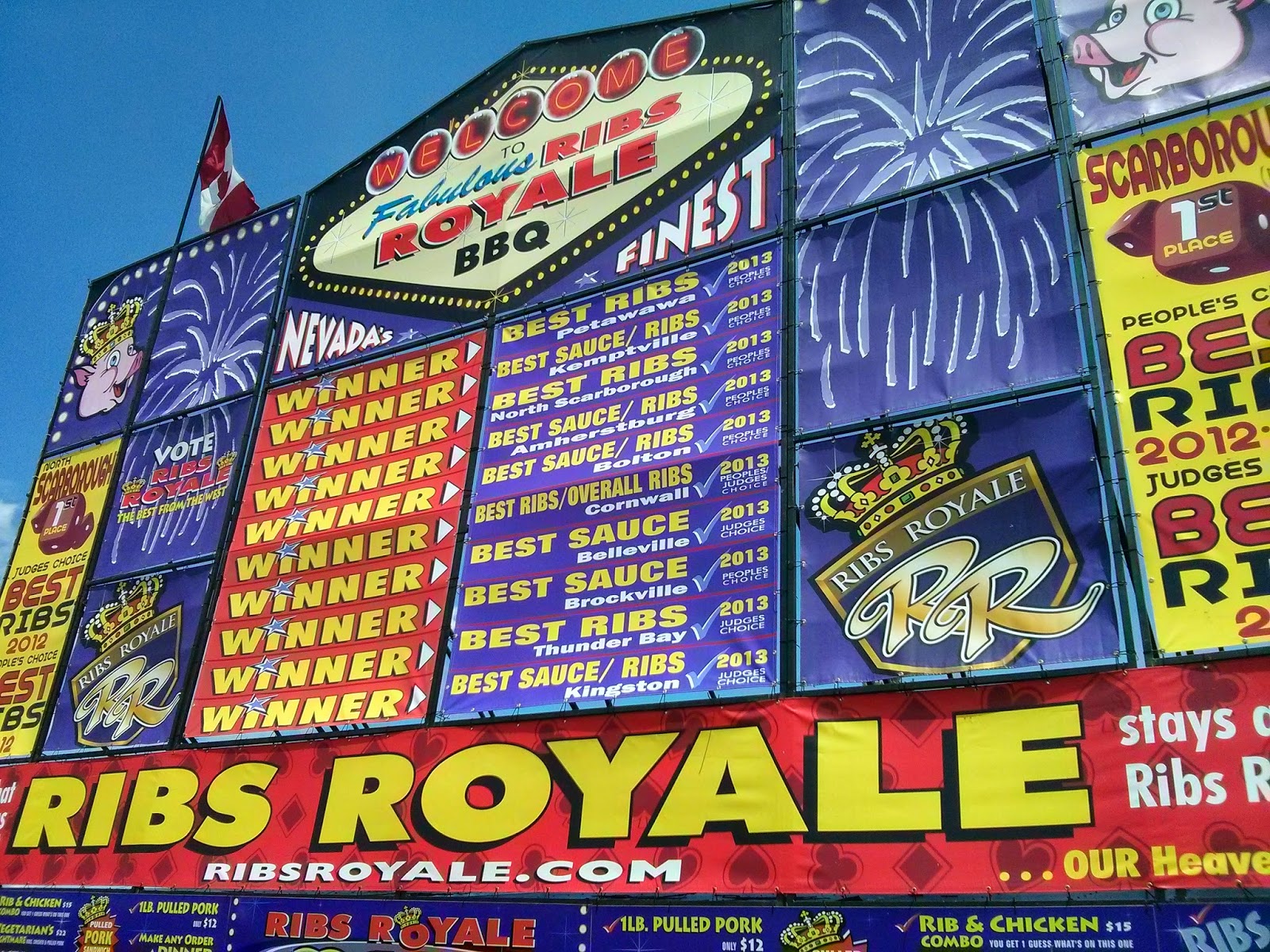 Along with the BBQ vendors, there was a shop for alcohol, one for lemonade / drinks, one for churros, one for ice cream and maybe a couple others that I'm forgetting right now.

My only complaint would be that there are no trees here.  If you are coming on a sunny day, bring some shade, whether you have a large brim hat or an umbrella.  After about 1.5 hours, Allison and Mike both got a bit burnt.

Eugenia Falls / Hawthorn Cottages
Went here for the first weekend of July with Sharon and a meetup group.  We left Mississauga at around 5:45pm and arrived there at around 7:30pm, so not too far away.  It did pass through a giant wind mill farm which I was surprised with since I don't recall EVER seeing so many will mills in Ontario.  They were not tightly packed, but there were lots of them.  I'd say at least 50 of them. 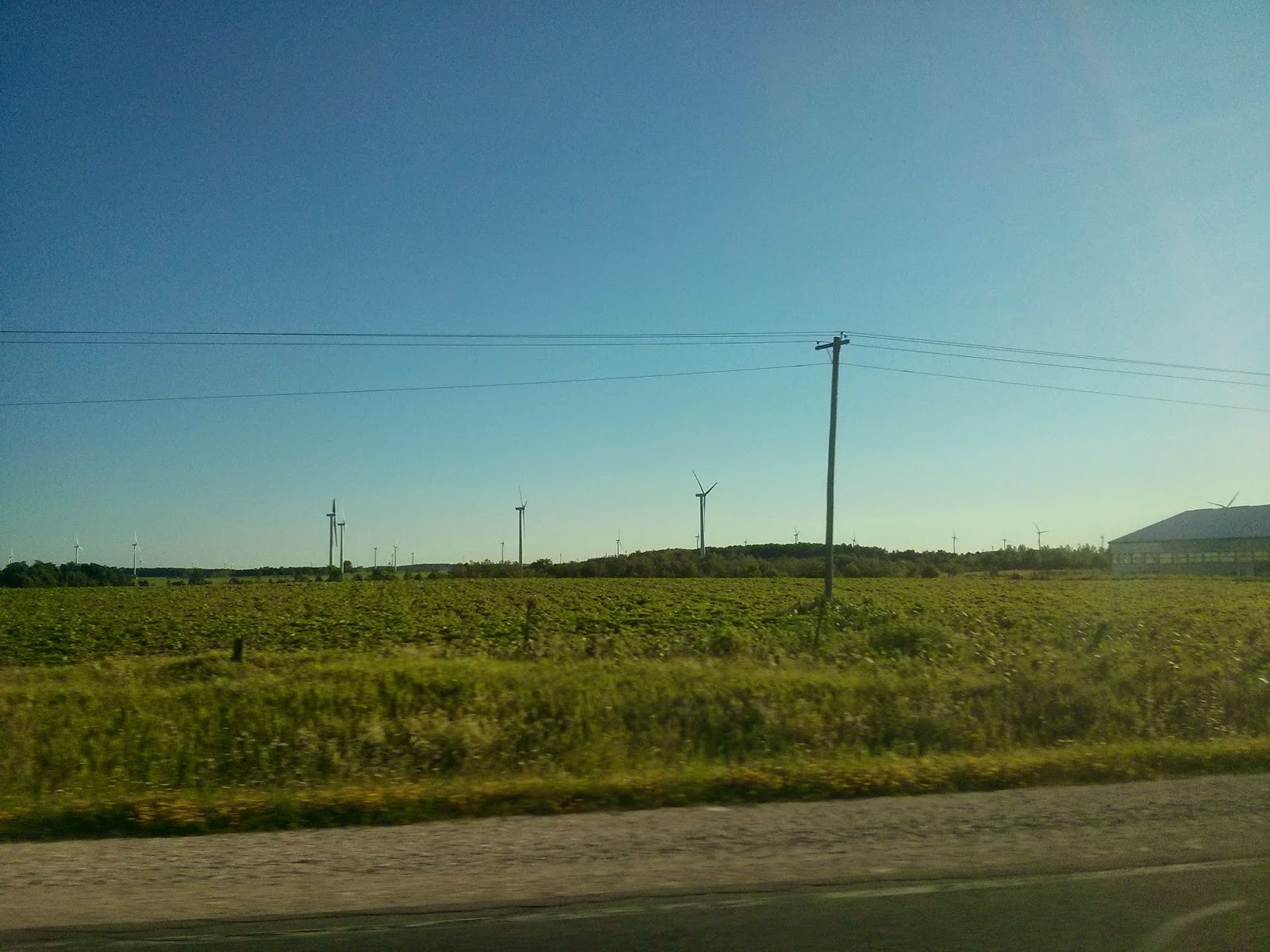 Hawthorn Cottages reminds me of a backyard that was split up into mini camping spots.  There are no trees to give you privacy so I hope you like your neighbors.  With the meetup group, we did occupy 3 campsites, so if anything, we hope they liked us!  The place does have washrooms with running toilets, one shower, all of which were pretty clean for a campsite (again, not really a campsite).  There is a small shop there where you can buy snacks and food at decent prices (cooked hot dogs and burgers for $3-$5).  It is right by Lake Eugenia, so you can go for a dip if you like.  They also have a water trampoline, fishing boats for rent along with bait and quite a few Adirondack chairs for lounging around by the lake. 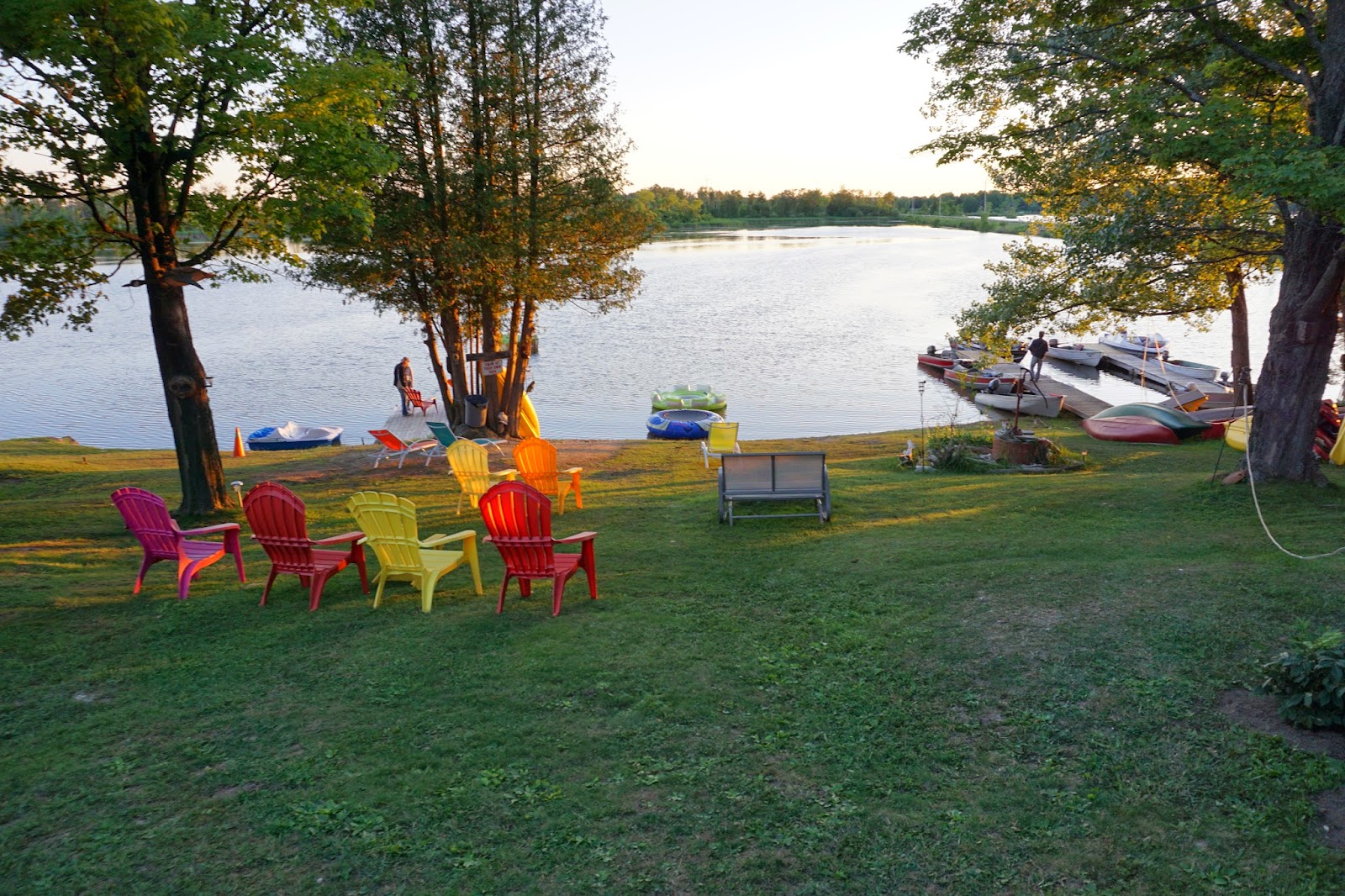 While there we met this family who owns a trailer there and had some fun together.  In particular, there was this one girl who must have been 8 years old or so.  She was very social and talked to us quite a bit and even egged us on to do things that she thought that we wouldn't be able to do (jumping into pretty cold water, flips on their swing set, amongst other things).  We showed her who's boss!

Nearby is Eugenia Falls.  A nice waterfall and the start of our 12km hike.  The beginning of this hike slopes down A LOT.  I forgot about this until our return because we had to climb up this thing at the very end of the hike.  The end point of our hike was Hog Falls, not a very tall waterfall but it was nice.  You can walk to the bottom of it and go under it if you like.  The temperature was a bit cold so I opted out of it, but we did make it to the bottom as shown below.  We probably took roughly 4 hours to do the hike.  When we reached Hog Falls, we stopped for lunch as well which is included in that 4 hour time. 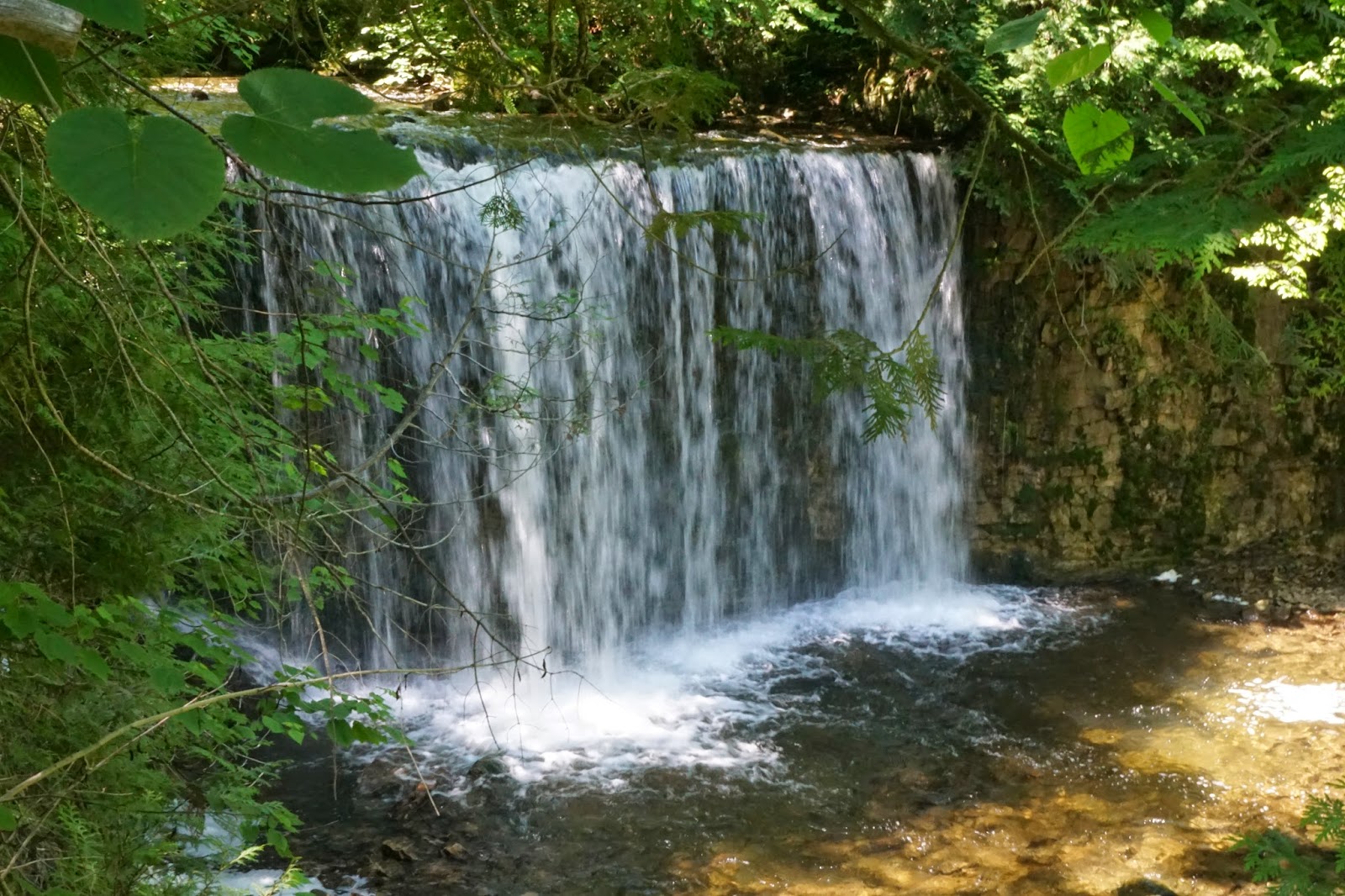 July really is not the season for me to go hiking in the forest (although I don't remember mosquitoes like this in June).  This particular hike has a lot of hills and valleys and a lot of in the forest, outside the forest.  The combination of sun and shade was nice, although it was a bit hot and the amount of mosquitoes in the forest was a bit out of control.  My insistence on no mosquito repellent probably resulted in the amount of bites that I got, but I thought I would fair okay since I was wearing long sleeve clothing, little did I know they would just bite through them.  On my right arm alone I must have gotten 20 mosquito bites.

Toronto Premium Outlets (Halton Hills)
Located just outside of Milton is the Toronto Premium Outlets.  I didn't know that Toronto extended that far out!  Even though we went on the World Cup Finals day, there was still a lot of people there.  Barely found parking ourselves and it looks like ample parking available.

You can check their website for the list of shops and even when they will have special sales.  This one reminds me of how the Chicago Premium Outlets are designed.  It is one loop with shops lining both sides.  The deals seem good for an outlet mall, although I think I prefer the new Niagara one more since it has more shops.  I'm also not sure how well this mall will work out in the winter since it is all outdoors.

Ellas Banquet Hall (Danforth Rd / Danforth Ave)
Was here for a wedding and I thought Allison was crazy when she told me to turn on Danforth when I was already ON Danforth.  Who knew there was a Danforth Rd and Danforth Ave and that they would intersect?

Ample parking in the back in case it looks busy out by the front.  The place isn't very large, but it was busy when we were there (there were at least 4 other events happening).  The front where you drop of people is nothing fancy but the side is pretty nice.  There is a fountain with statues and A LOT of flowers.

We were attending a small wedding and it was nice.  The room fit 9 tables well which could fit roughly 10 people per table along with the head table, a dance floor, and a bar.  Nicely decorated and with access to the room from the inside of the building as well as the outside and it had private washrooms so it wasn't shared with everyone else.

Food was good, not sure if it was catered or provided with the hall.  Came with typical salad appetizer, chicken/prime rib main with side vegetables and ice cream for the end.  There was a pretty big dessert spread considering how many people were there with a large variety of fruits and several cakes including the wedding cake.

Big on Bloor (Bloor between Dufferin and Lansdowne)
A street festival on Bloor that occurred in July.  I'm not sure why it is called Big on Bloor because there wasn't anything big there.  The road is closed in the area, so you are free to walk on the street.  There are shops lining up both side of the street.  Lots of small jewelry shops, a few shops that sell street eats among other things. 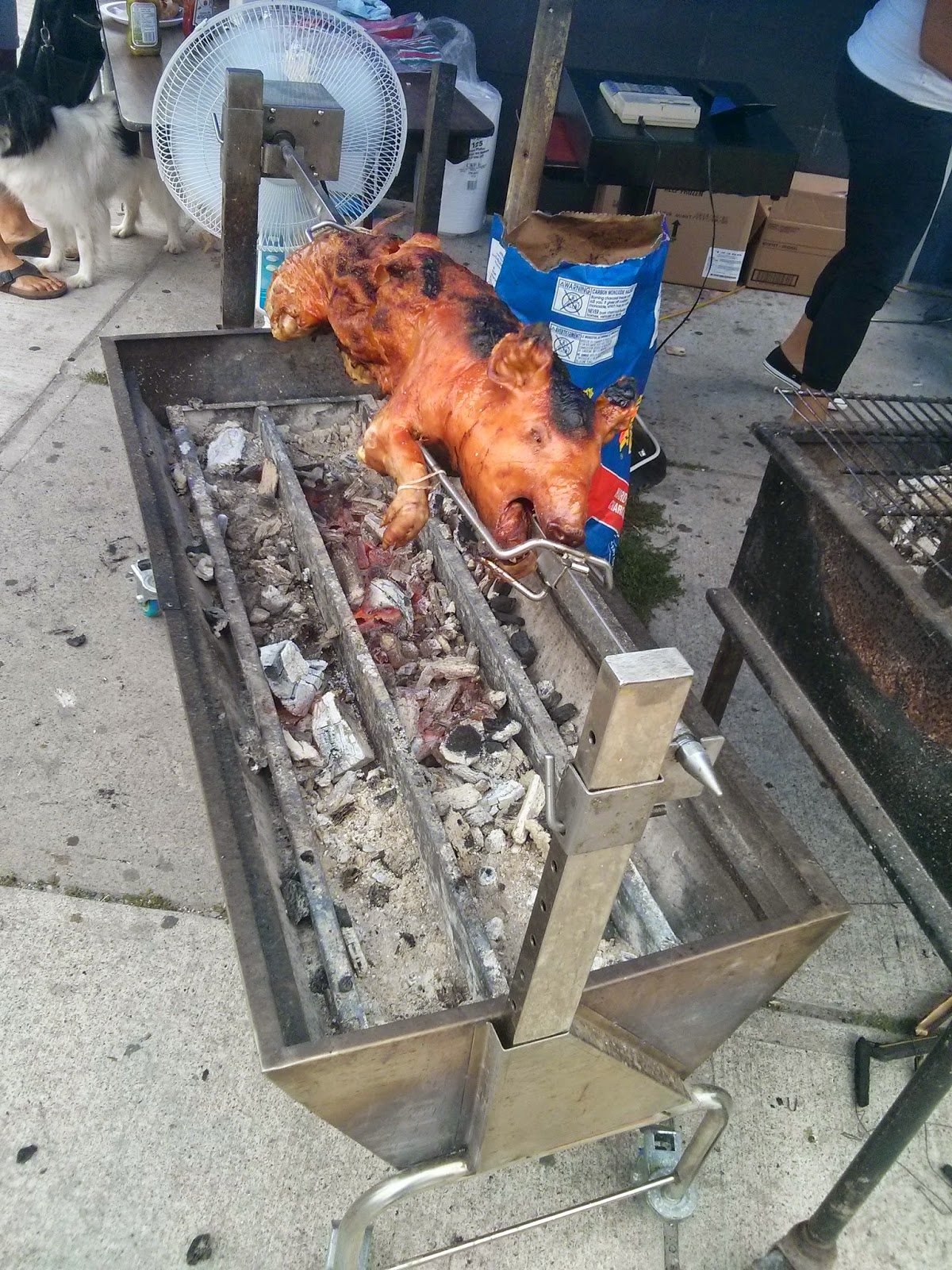 There was a good street performer that we fortunately saw from beginning to end.  Rarely do you see one that is so witty with his comments and jokes.  There were a bunch of kids there who were helping him with the act but they didn't always seem to help him as he liked.  At one point he was dropping a bunch of balls so that the kids would pick them up and hand them to him.  Once they caught on that he was always dropping more, they ended up throwing them at him instead. 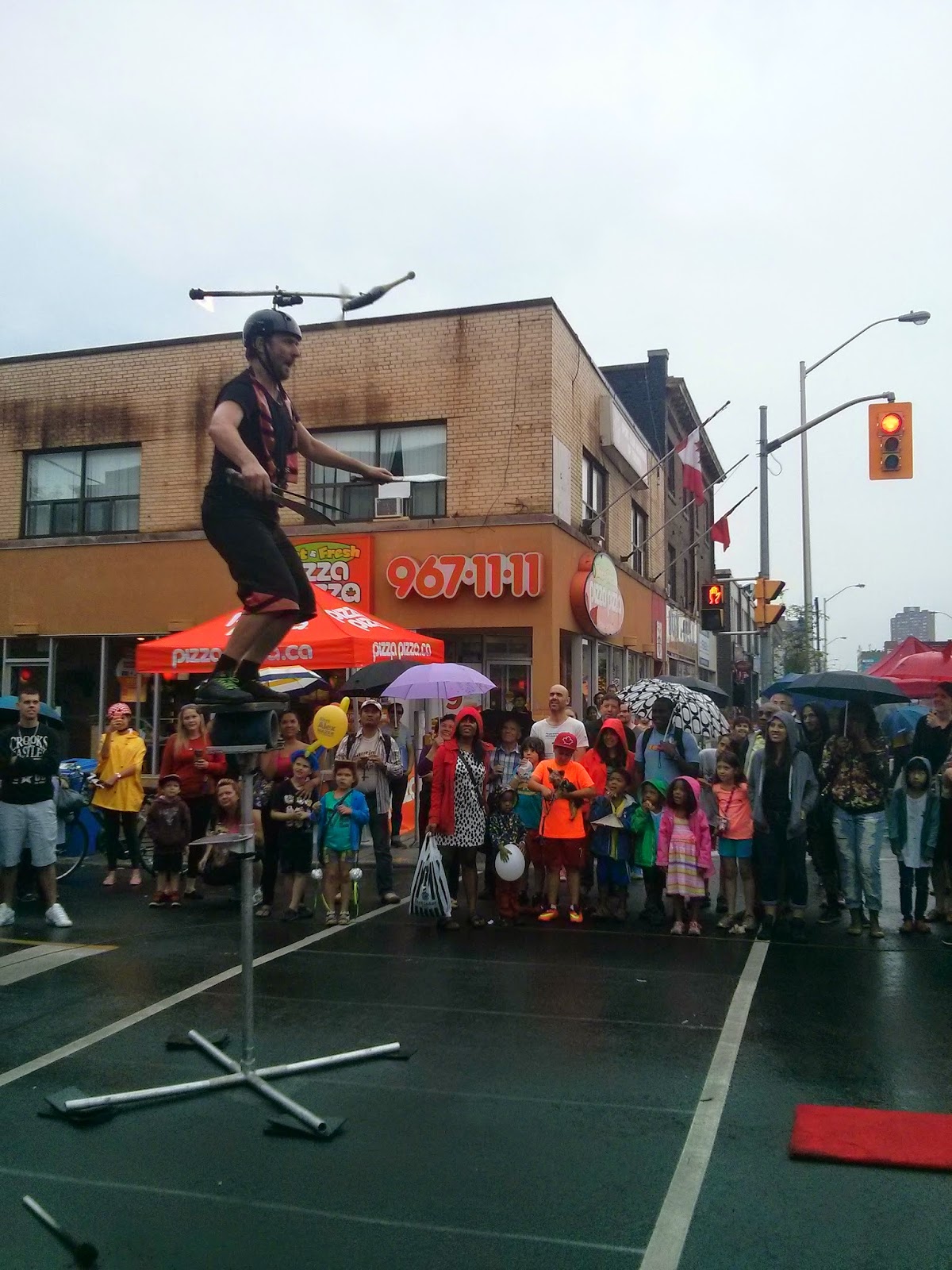 He was a good juggler, did a balancing act and even a handstand on a stranger!  Cool stuff.

I'd recommend going if you are in the area but not if you plan to make it an event.  We probably walked both ends and saw the whole performance in about an hour.

Castle Board Game Cafe (College / Spadina)
Located just south of College and Spadina is Castle Board Game Cafe, one of the newer board game cafes in Toronto.  While we normally try to go to Snakes & Lattes, we didn't get a table due to the number of people so we headed down here and gave it a try.

The space is a lot bigger than it looks from the outside.  In the back there is a room that is slightly larger than what you see outside, so even if it looks packed from the outside, it may very well have space in the back.  The back is nothing to write home about, but it is spacious enough.

The board game selection seems pretty decent from what I saw.  Had everything we would try and some that we would like to try but didn't.  I'd say it has slightly less than Snakes & Lattes, but they have a good amount, they even had Zombicide which we were surprised with.

This place is a bit more expensive than what we are used to.  $2.50/hr per person.  Since most games that we play last about 1-2 hrs, this means that you may end up watching what you play since time is money.  By comparison, Snakes & Lattes is $5 flat regardless of how long you stay there.  Snack and drink prices seems normal ($3-$5 for specialty coffee drinks, $4-$5 for smoothies).

Staffing seemed like an issue.  We went on a Sunday afternoon and there were only 2 staff there and they seemed pretty untrained since they didn't really know the menu too well.  We didn't try to get them to teach us anything since we didn't really see them all that often.  They could use some work in this department since the staff at Snakes was generally really helpful and plentiful.

I would return if Snakes & Lattes isn't open.

I think I recall roughly 15-20 food trucks there, all parked within the park itself.  There is ample parking if you decide to drive here or do as we did and just take the Queen streetcar over.  It is just a short walk from the streetcar stop to the park (maybe 5 minutes).

There were a few familiar names but a lot that I have never heard of before.  In the end, I tried Bacon Nation and there Drunken Stupor Sandwich (Thanks Rob Ford!).  It is a peameal bacon sandwich with beer-battered onion rings, bacon, and BBQ sauce.  It was heavenly, although the sauce I found a bit sweet.  It was $11 which I found was a bit high since it was from a food truck, but I did enjoy the sandwich though, so no complaints. 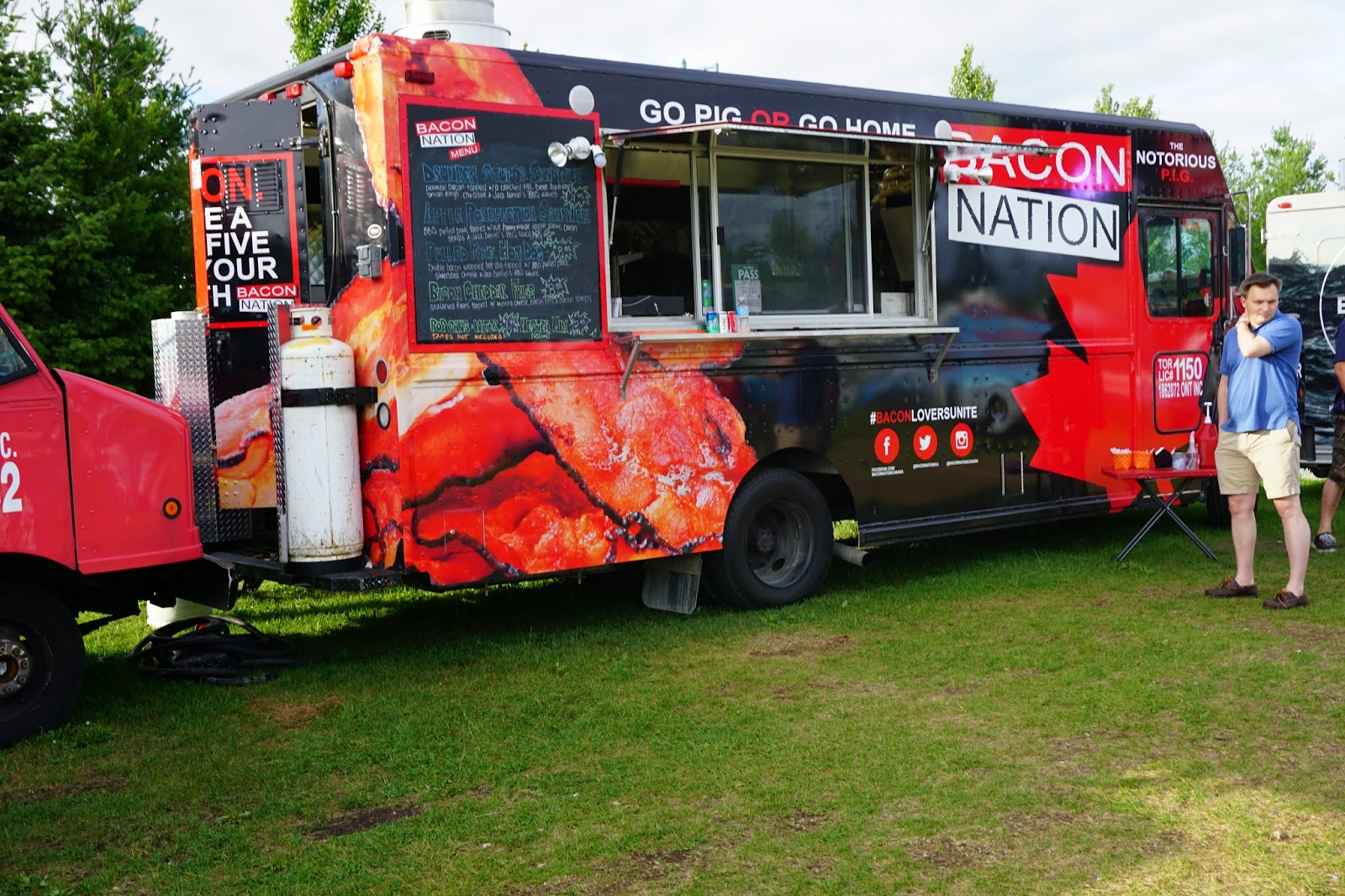 While wandering around, there were a few stalls that were set up for advertising purposes where you could get some freebies.  State Farm was there giving out frisbees and some toys.  Pure Leaf was there handing out samples of their Iced Tea and gave out coupons for free tea.  And there was a pasta seller there with coupons as well.

All in all, a fun spot.  While eating, there is also live music  there since there are bands on stage there during the events.  If you want to try food trucks, this does seem like a good place to go since I have always seem to fail when I go to bigger events (mainly the one in distillery which was a disaster when I tried a few years back).

August 2014 and beyond!
Slowly counting down the days until our big trip to Peru in September.  I feel like I have been asked when I am going away FOREVER at work since this has been planned for about half a year now.

In August we will be going to Tobermory, camping, wedding and a few other things!
Posted by Wai at 10:33 PM