Today we are off to an early start in order to ensure that we get a parking spot at Cyprus Lake.  While we were at the Visitor Information Centre yesterday, they told us that the lot would fill up really early in the morning, so we were trying to arrive before 9:00 AM.

We woke up this morning to try to get out of the hotel by 7:00 AM, grab breakfast and try to head there as early as possible.  I was hoping that Little Tub Bakery would be open by 7:00 AM, but unfortunately it wasn't open when we arrived slightly before 7:00 AM so we headed back to town to see what was open.

Luckily Craggies was open for breakfast.  We ordered a BLT sandwich for roughly $5.  It was expensive, but it tasted really good.  The others had a western omelette, not sure how they liked it.  It was weird since I noticed that their western omelettes don't include pepper.

Off to Cyprus Lake!  We arrive and we noticed some large gates with the gates up and a car was waiting there as if they were waiting for a park ranger to pay for the parking permit.  I got out of the car to check and right behind us was a car who told us to just keep going because this was the point where they would turn back people since they parking lot is full.  Thinking back, I thought this is ridiculous, how could something like this fill up that badly?

We kept driving, and noticed why the gates are where they are.  It was another good 10 minute drive to actually get to where the park office is to buy a parking permit!  If you drove all the way in to get turned back, I would be really disappointed.

Once we got to the park office, we got out to notice that they office itself wasn't even open yet!  They open at 8:00 AM!  Luckily we were only 10 minutes early, enough time for the girls to take some pictures and go to the washroom.  The parking permit at this time cost $11.70 per vehicle.  Good for all Parks Canada parks for the day.  With the permit bought, off we went to see how tiny this parking lot would be that turns back people!  The parking lot itself is actually pretty large.  I would say over 100 cars can fit here, but I guess if you don't carpool, it isn't that many spots. 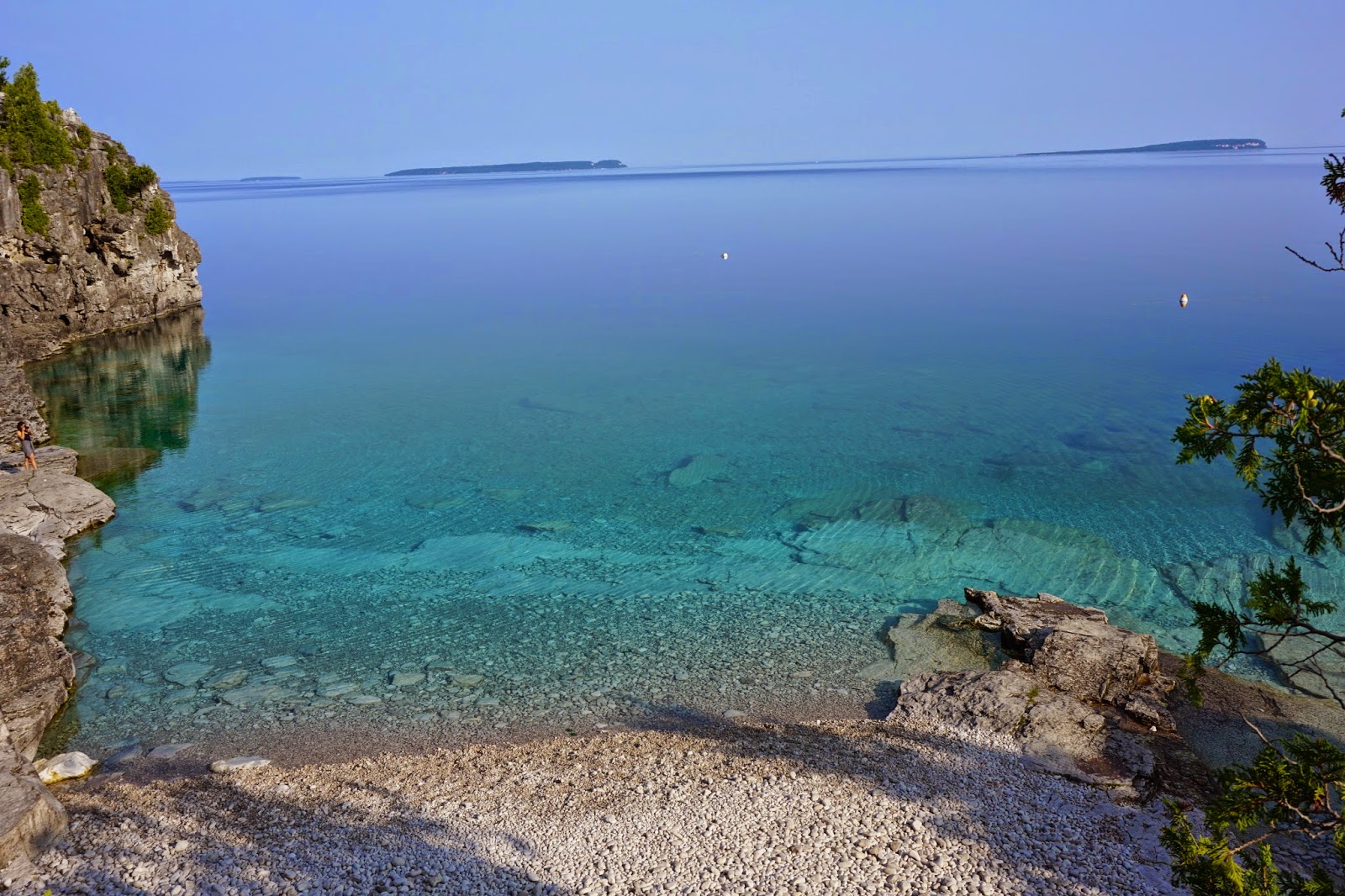 Off we go!  Off to the Grotto!  Our first stop was a pebble beach at the Indian Head Cove.  I have never seen such blue water in Ontario before!  The view is beautiful.  Since we were early, we got to see the area with just a few people and it was great for pictures since you were alone with nobody in the background.  We stayed here awhile and wandered a bit and took A LOT of pictures.  I really enjoyed this area and was glad that I actually made it here. 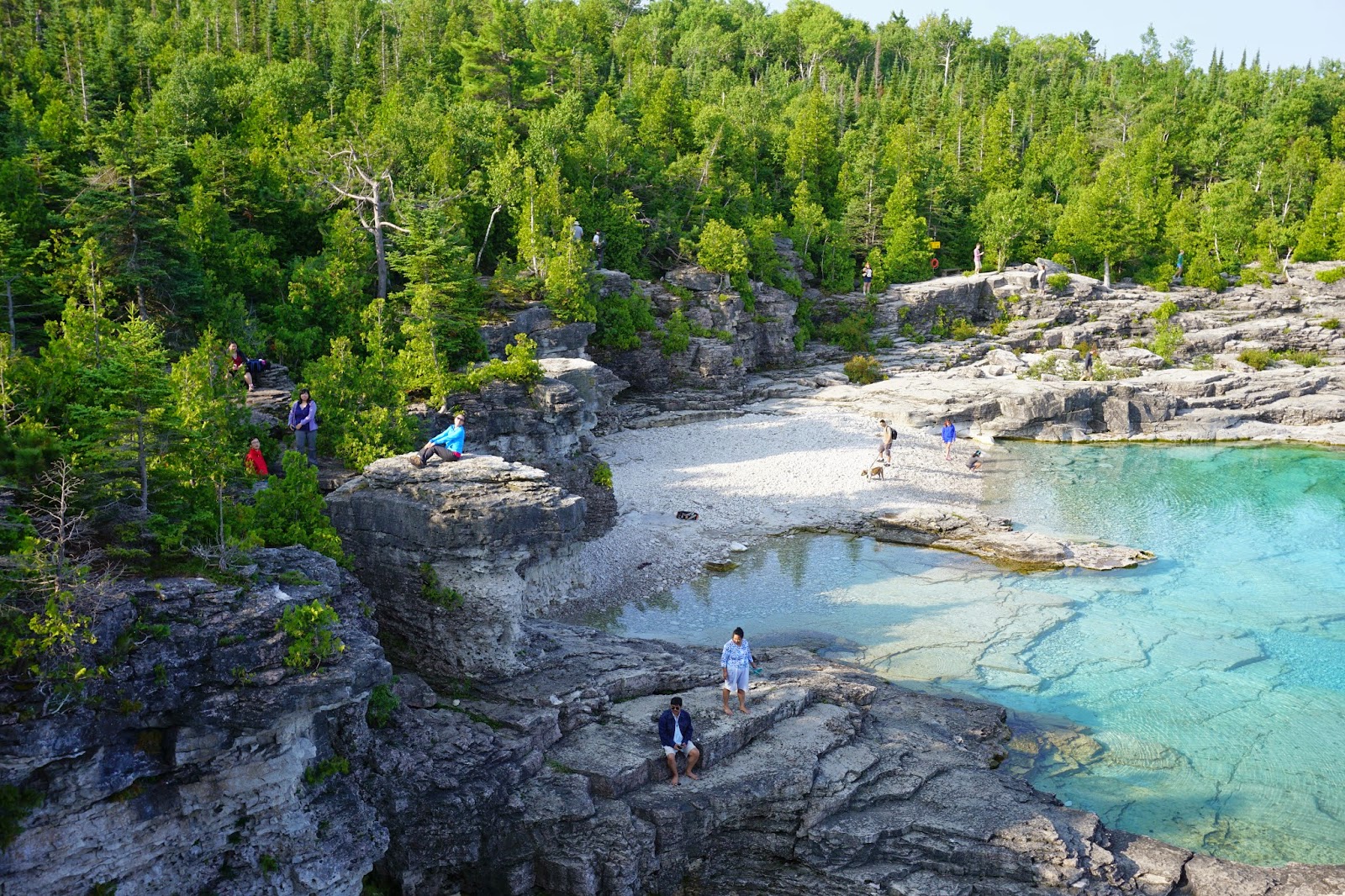 After this, it is a short walk to The Grotto.  I didn't know what to expect, since looking at pictures is not quite the same as looking at it with your eyes.  The Grotto itself is actually right underneath The Grotto area.  You can't actually see much of it from up top and you need to climb/jump down to get the full experience.  We were told that there was a hole that you can actually climb down into to get there.  I stared at the hole wondering how the heck I was going to get down because it is a pretty small hole.  After the initial small opening, it actually widens up pretty quick and after a few guess-work steps and handholds, we were down in The Grotto!  Looking at it, I'm glad I went rock climbing because it did give me a better idea of what I could use as a foothold/handhold.  All but Nancy went down, so she actually got some nice pictures of us climbing up and down into The Grotto.  Nancy, if you read this, do try to go down next time if you can.  It's worth it. 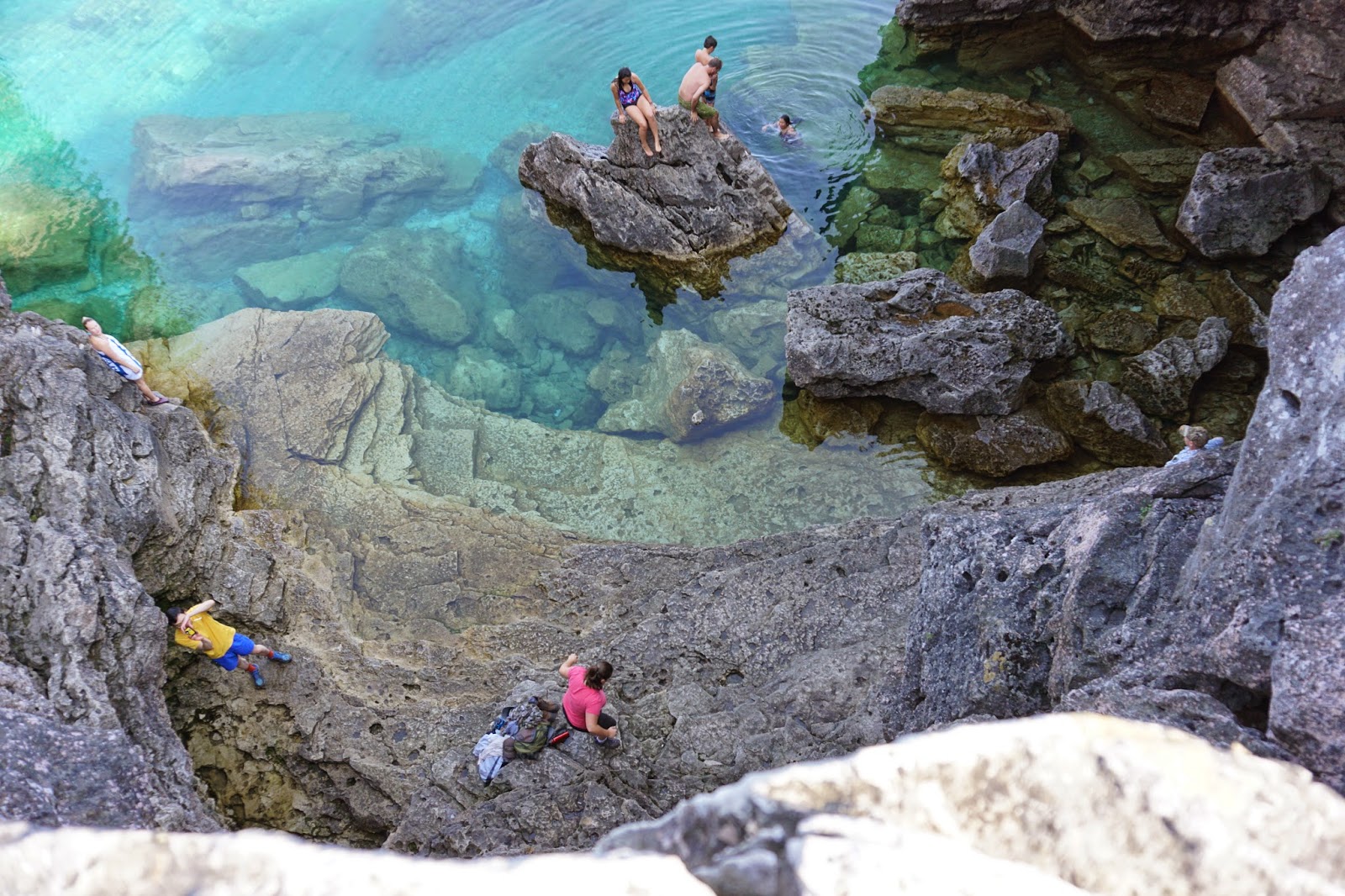 The Grotto is really nice.  If you don't mind the climb, you should definitely try to get down there.  I think a combination of it being early and the fact that it was a bit more difficult to get to meant that there were less people there.  This also meant that we were worried about bringing our real cameras down so we brought waterproof ones and Sharon's iPhone down.  When we were at the bottom, there were probably 10 other people there.  We decided to do a different climb up to get to the top instead of using the side hole that we went down with.  It was a little bit more difficult, but still manageable for all of us.

At this point, Nancy decided to head back to the car since we were heading to the Overhanging Point and she has been there before but didn't want to go.  Sunny joined her to the car since it was his car and we agreed to meet there to have lunch when we go there so we part ways for a bit.


The walk to the Overhanging Point was rough, it wasn't flat like the Georgian Bay Trail which is the trail from the parking lot to the Indian Head Cove.  It was hilly and rocky.  It is not difficult, just watch your step and wear proper footwear (don't try with sandals or flip flops).  It probably took us half an hour to get there.  We stopped a few times to take some pictures and eventually got there.  The lookout is nice, although the rock itself is weirdly porous, so I couldn't tell whether or not the thing would just snap.  Since it is not flat, it was actually somewhat difficult to step because one wrong move and you are off the cliff and likely dead. 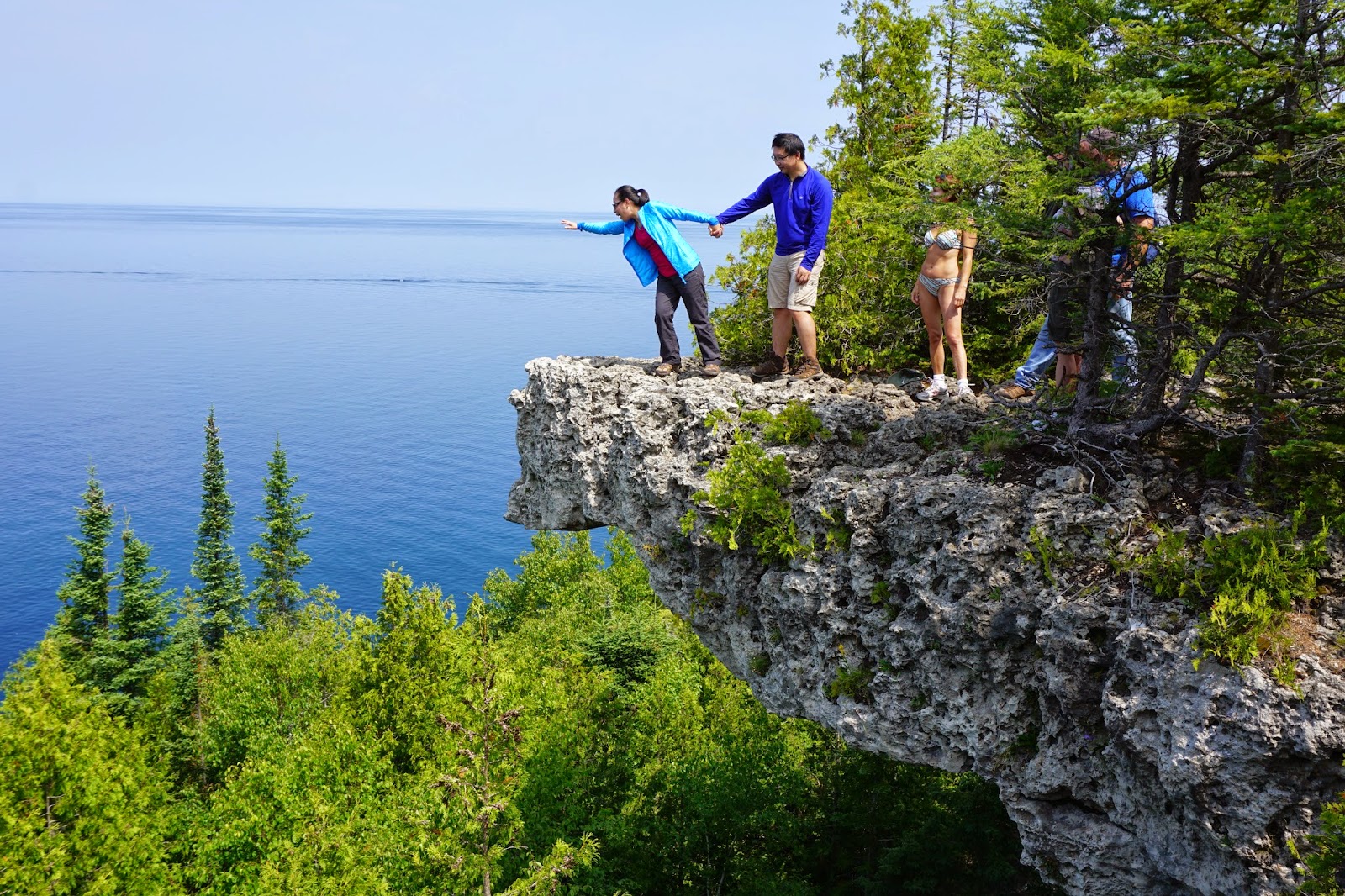 While there, we met this old couple who was telling us that you could actually make it to the bottom of the area through this side hole.  What's up with this place and holes that you can climb?  During our lunchtime I kept teasing that Sharon would go down the hole and have a look.  In the end, I went down first and Sharon followed.  I would tell Allison whether she would make it since I am taller, I could grip things a bit easier than she would.  I would say that it isn't anything special.  If you don't want to climb down the hole, don't.

Next we headed down the Marr Lake trail to go back to the parking lot to meet up with Nancy and decide where to go to next.  We were told it would take an hour to get back and the total distance is 0.9km.  I don't think you actually need that long.  There isn't much to see on this trail in my opinion, so you can just head back the way you came, although distance-wise, this is probably quicker than going back to The Grotto and back to the Georgian Bay trail.

We met up with Nancy and head back to the hotel so that we could rest up and decide on what to do next.  In the end, we planned to head to Half Way Log Dump (as per the receptionist from the Visitor Centre) and Singing Sands Beach before heading to dinner.  Half Way Log Dump is a bit of a bust compared to Cyprus Lake.  Maybe if we came here first we would have liked it more.  It is similar to Cyprus Lake, but not as pretty.  After a few quick pictures, we left to our next stop.

Singing Sands Beach is a sand beach!  All the other beaches that we went to were pebble/rock beaches, so if you walked barefoot, it would hurt.  This is an interesting beach.  While we didn't go into the water, there were a lot of people here.  If you plan to swim, I would avoid this place.  It looks like you would walk out for at least a kilometer and you still wouldn't be able to swim.  It is THAT shallow.  We saw people really far away and they were just standing there in the water.  I found this really odd. 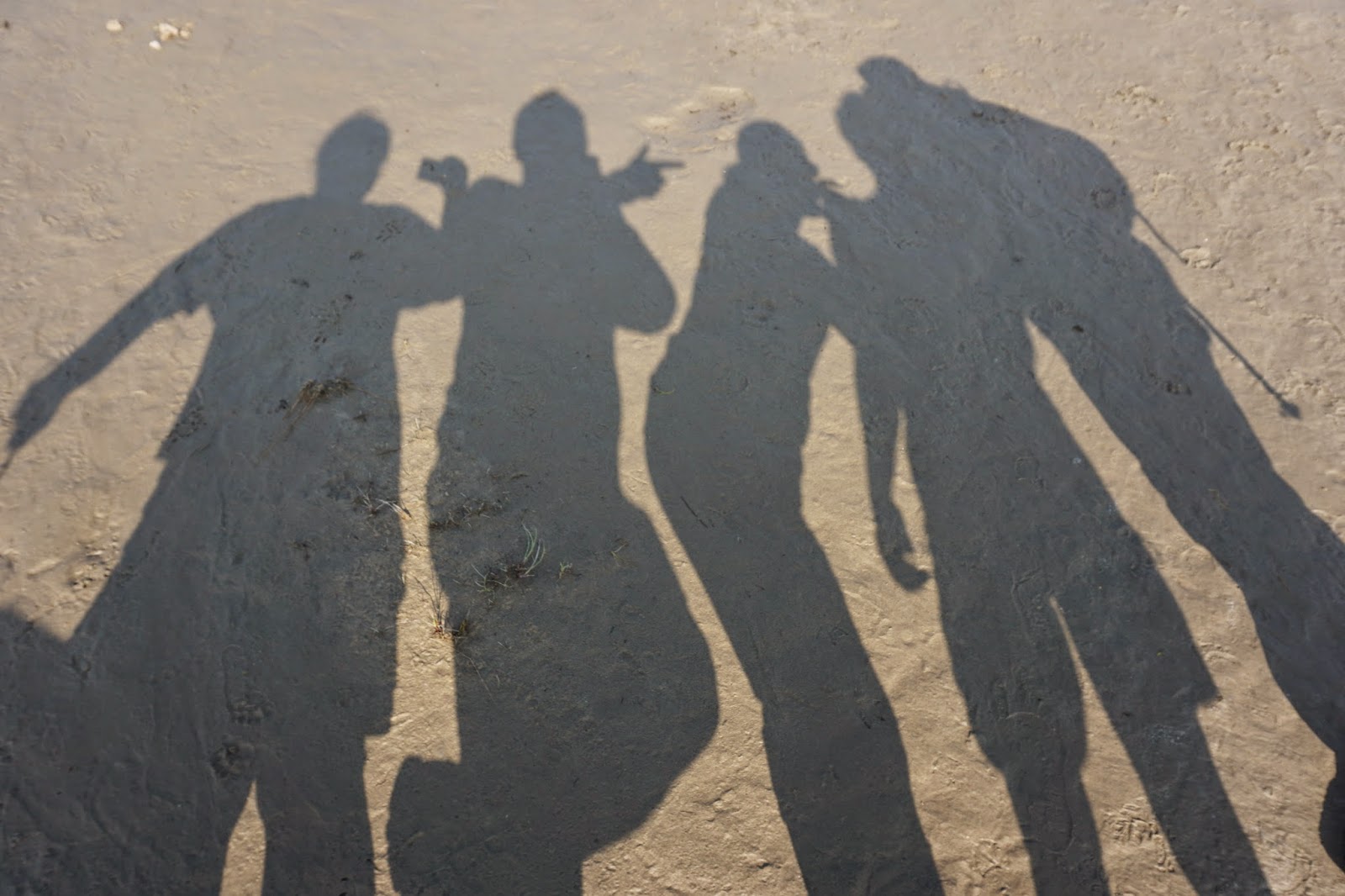 For dinner we ended up at The Fish & Chips Place.  For $80 we got 12 pieces of fish and a family size portion of chips.  A much better deal than Shipwreck Lee's.  This fish is a bit fishy for me, so I didn't enjoy it as much as Allison did.  I wouldn't return, but only because I don't like fishy-fish.

We stopped at The Sweet Shop for ice cream after dinner.  It was slightly more expensive than Ice Cream & Treats, but we much preferred this place.  It does have to do with the flavor though since we liked this one more.  We got toasted s'mores ice cream, not quite as good as Greg's Ice Cream but still good.

Big Tub Lighthouse is our last stop before we called it a night.  A short drive from the downtown area is a lighthouse that has been there for over 200 years.  It was cool to see a lighthouse, there is a good view here, but unfortunately you can't actually go inside the lighthouse.  It is probably a 10 minute stopover.


Tomorrow, we go to Lion's Head to see the lighthouse and head back home!
Posted by Wai at 10:35 PM