Our final full day in Cusco before we head to Lima for a day and then we head back to Toronto. Today, we plan to do some last minute souvenir shopping, meet up with some friends from the Amazon and visit the planetarium. The breakfast included in the hotel consists of a hot drink, freshly squeezed orange juice, bread and a tomato omelette.

The hotel is right by a children's park, so I said, let's go have a look! (ya, I seem to enjoy these for some reason). There were NO kids there at all, I guess they were all at school, so we got some nice solo pictures while there. It seems like a nice playground for kids with lots of structures to play in.

We wandered to the main square (Plaza De Armas) and found out from tourist information where the local handicraft market was and we headed there. Not much here, and frankly, I'm not surprised. Lots of shops which sell the same things ('alpaca clothing', jewelry and souvenirs). We ended up picking up some trinkets after much bargaining (something that they said cost 3 soles, I ended up getting for 1 soles).

On this trip, we saw quite a number of street vendors and I always wanted to try some of it since the locals were. Since we were going on the Inca Trail and Amazon, Allison said I should wait until we got back in case whatever we got was dirty. So, today, I finally got some random street drink, a questionable pineapple juice on the road. Why is it questionable? It came in a used fanta bottle with no label on it. 1 sole! It was actually pretty refreshing.

After the handicraft market, we met up with some friends from the jungle for lunch at a restaurant recommended by our tour guide called La Cusqueñita for guinea pig. The place is awesome. Guinea pig only cost us 45 soles (this is pretty cheap compared to what we've seen at 60-80 soles) and it included the whole thing (at many places, you don't get the head). My roasted lamb shank cost 26 soles and the portions are huge. Highly recommended, my lamb was nicely done and Allison devoured the guinea pig like she hadn't eaten for days. While we were there, there were shows going on, roughly 5 dances which were differently themed. By the time the dancing started, the place got busy, so try to get there slightly before noon. There is a buffet, but we just went with the a la carte menu. It is roughly a 15 minute walk from the main square. If you get lost trying to find it, just ask a local. We asked 5 people and each one was able to tell us where it was. Oh, by the way, it is a pretty local food joint, we didn't see too many tourists (or maybe they were all at the buffet section).

After lunch, on the way back to the main square, we stopped at El Hada for some ice cream. It's very good ice cream, although a bit expensive, in my opinion, at 6 soles per scoop. It does come in waffle cones though.

We went to the Choco Museo after. It is a chocolate shop which has a museum attached to it which talks about the history behind chocolate, how it's made, where it comes from, which country consumes the most and more. It's a nice stop and it's free! Less than 5 minutes by foot from the main square.

Based on suggestions, we went to the planetarium. It is different from your traditional planetariums because it actually takes place at someone's home! They still had the dome room where they project the night sky on the ceiling and you can see the stars. There were also some posters on the wall that explain how the Incas viewed the night sky and how they built their buildings and even their farmlands around it (the night sky). We learned about constellations (who knew there are different sets of constellations based on where you are on Earth?) and how the Incas viewed the sky. After the presentation we got to see some stars through a telescope (roughly 5 stars, some being double stars, which are stars that look like one star by the naked eye but under the telescope, you can actually see that it is two stars close together, some being stars you can't even see without the telescope and others) and we even saw Saturn (it was pretty neat to see what it looks like since it isn't as detailed as the pictures you see on the internet)! 50 soles for roughly 2 hours. It is a bit more expensive than I thought it is worth, but if you have time, it's a nice attraction. They do provide very good service, pick up from the square, provide you with blankets for warmth, a hot drink and a ride back to the square. 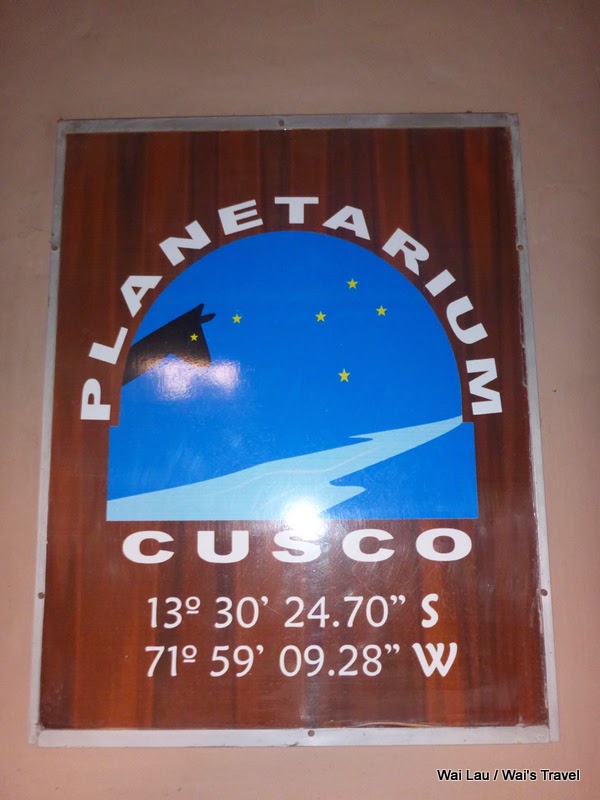 The planetarium drops you off at the main square (pick up is at the square just next to it). Prior to visiting the planetarium, we had already decided that we would go to Uchu for dinner. The food was great. We ordered steak which comes on a hot stone and you use the stone to cook the steak to your liking. The full menu with pricing is on their website. The steak entrees are roughly 45 soles with the appetizer being roughly 20 soles.