Last year, Mike mentioned that he wanted to try to go to the Sugar Shack in Montreal and I had agreed since in general, Mike knows where to go to eat.  The process was, apply in December (give the place a few preferred dates and number of people) and wait for a response.  We did not hear back until February for a seating in April!  But we lucked out, and we got to go for Easter long weekend.  Note that we did not really do much other than eat here, so you have been warned about the content of this post.

To start, this took place from April 2 - April 5 and there would be 7 of us.  To our surprise, roughly 3/4 of the way there, the highway slowed to a complete stop and we saw smoke up ahead.  At this point, we were worried that we would not be able to make it there in time.  Luckily, it cleared up after about 30 minutes. 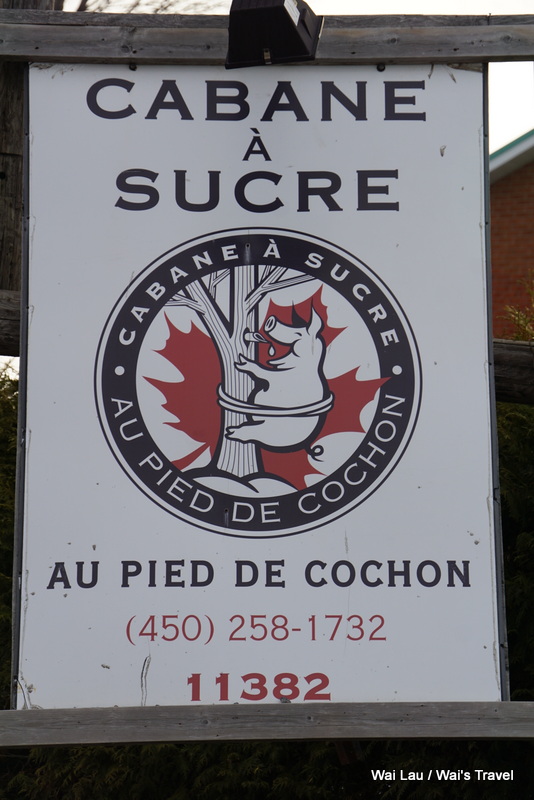 This is the place that Mike was talking about and this entire roadtrip was around going here.  During the winter season, this place specializes in a set menu that revolves around maple syrup.  It cost roughly $65 + tax/tip per person and you don't get a choice, except if you have dietary restrictions, they will try to accommodate.  This was the biggest meal that I have ever had.  It had its ups and downs, but in general, I thought it was pretty good and worth a try if you can get a reservation.  With all the food that we got, we still had plenty of left-overs.  The menu was divided into 4 courses, each which consisted of anywhere between 2 - 4 dishes.

I remember Mike and I trying to come to this place before but failed and we decided to wait this time.  Don't try to come with a big group (5 or more) because the wait is pretty bad.  2-3 is ideal it seems.  The sandwich and salad that we had were nice although I don't feel that the price was justified and having waited for 30 minutes, it built up a bit of anticipation which it failed to live up to.

This is Allison's favourite cupcake shop here and still remains that way.  6 cupcakes set us back $20 and in general they were pretty good.  Since we came during Easter, they had one which was mint based with easter eggs on top.

Stopped by here for poutine.  I thought it was pretty good with the smoked meat, we got both a regular one and one with smoked meat on top.  It seems a bit pricey at almost $10, but the portion that you get is pretty good and with 7 people splitting 2 of them, we were satisfied with this as a snack before dinner.

This place was interesting.  It literally only has two set menu options.  One which is a subset of the full set menu.  Full menu is soup of the day or tomato juice, walnut salad, steak and frites, and profiteroles.  The smaller menu is walnut salad and steak and frites.  I enjoyed the soup which was a cream of leek, the steak was okay, I enjoyed the fries and salad as well as the profiteroles.  Full set menu was $30 and the smaller one was $24 if I remember correctly.

We stopped by here for late night chocolate.  This is a pastry shop that has drinks like coffee and hot chocolate.  We ordered the praline and caramel petit pot and the hot chocolate with marshmallows.  Service could use some work at the shop, but the treats were nice.

Stop here for bagels and for some reason, the location at Monkland screwed up most of our to-go orders which is unfortunate.  Fortunately, the bagels that we got were still good.  Do try to make a stop here if you can while you are here.

BBQ!  Oddly located in a very quiet area although it may be because we came on Easter Sunday.  The waitress was obviously understaffed since she was running around a lot and she was the only waitress.  We ordered the chicken and waffles and the BBQ chicken sandwich.  I thought the chicken was still very moist which was nice.  The fries I thought were very good as well.  Now that I think about it, why didn't we get something that was BBQ?  Oh well.