During a February road trip, we went to the Ice Hotel in Quebec City, also known at the Hotel de Glace.

Initially I thought that it would be neat to sleep over but after looking at the cost and what it means to sleep there (over $200 a person/night, or $400+ per night), I easily said no and we just paid to visit the site instead.  Do note that the price is high because they actually rent a room at a nearby hotel for you as well in case you don't like it and to shower and other things (the ice hotel only has toilets).  Also, you aren't sleeping on a block of ice, you will sleep on a mattress that is placed on top of an ice block with an arctic sleeping bag.

For $18 (price may vary), you get a tour of the complex which gives you some background on how they build the structure and some of the types of rooms that they have there.  It is a bit steep in price but I think it is worth a visit.  After the tour, you are free to explore the site on your own (you can visit all the rooms and the areas).  Besides the rooms, there is a great hall where you can mingle with people since there is music and a bar, there is a chapel, and even a slide as well. 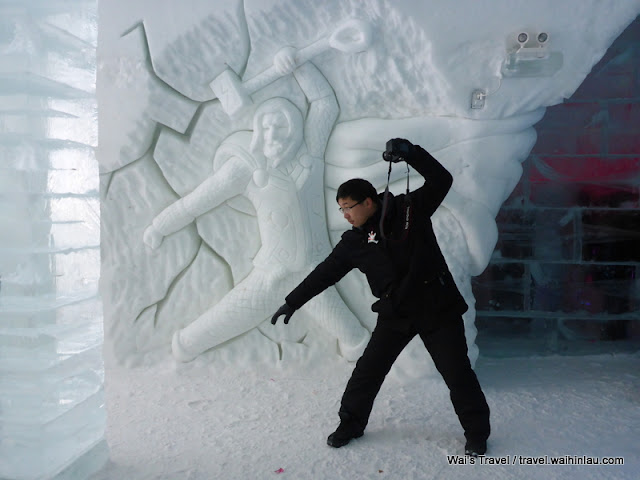 The hotel itself is built every year starting in roughly December, open to guests in January and torn down in April.  It takes roughly a month and a half and 60 people to build with a combination of snow (over 15,000 tons) and ice (over 500,000 tons).  Although it is called the Ice Hotel, the interior temperature is not as cold as you would think since snow is actually a good insulator keeping the temperature at roughly -2 C to -3 C (28 F).