In this post, I will be talking about Ponte della Cositituzione, the first bridge that you will notice when you arrive in Venice by train and is the newest of the four main bridges that cross the Grand Canal. 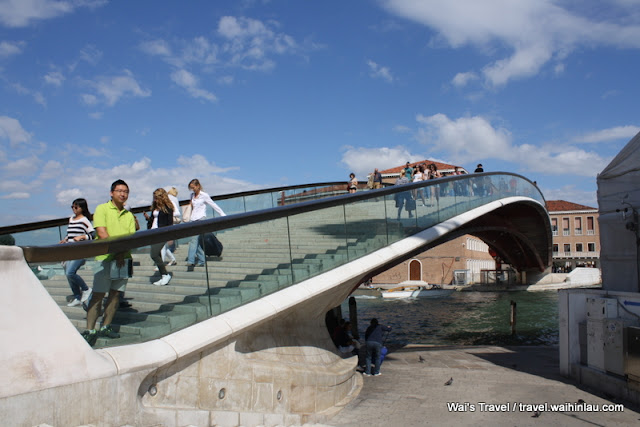 Unknown to a lot of people, there is actually a lot of controversy surrounding this bridge, in particular, Santiago Calatrava, the architect behind it and how he has significant budget overruns on all of his projects, yet he somehow continues to win them.  Originally, it was budgeted to cost 4 million euros but with a real cost being estimated to be between 11 to 20 million euros and an annual maintenance cost that is estimated to be almost 1 million euros.

It was the first bridge to be built in Venice in 125 years, opening in 2008.  The bridge had a lot of issues, issues like, a modern bridge in classical surroundings and lack of accessibility for the disabled (the red orb that you see on the side apparently doesn't work).  The controversies surrounding it actually led to the inauguration of the bridge to have no festivities for the first time in the history of Venice.  Also, due to soggy Venetian soil, the bridge actually moves about 2cm per year!  Not only that, a majority of the steps are actually made out of glass, so it does look nice, but clearly there was a lack of practically in the design process when this was decided on.  Venice has a lot of water, this leads to wet glass steps which leads to slips and falls.  The design of the stairs are uneven, so you cannot walk like you normally would expecting evenly placed steps.  Not only that, the glass steps easily freeze over in the winter.

While it looks like a tourist and I'm glad I saw it, I actually wonder how long it is sustainable.