Earlier this year, Allison's dad got discounted tickets to Ripley's Aquarium and I immediately said 'yes' given that it would be $15 vs $30 normally and I think at $15, it was worth it, at $30, it is a bit steep for what you get (at least as an adult with no kids). 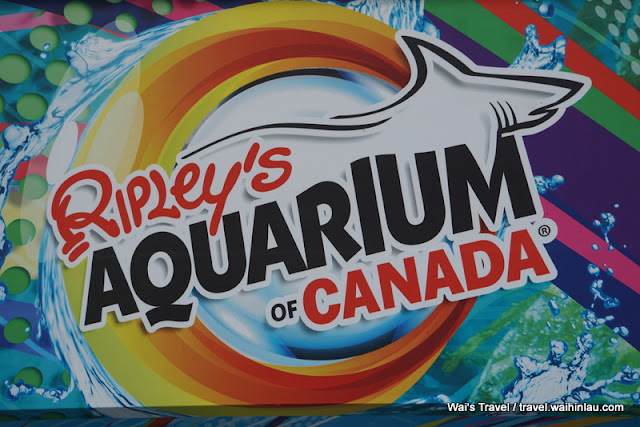 Originally planned in 2004 to be built next to Great Wolf Lodge, it was relocated to Toronto and it is now next to the CN Tower.  Construction began in 2011 and finished in 2013 with an estimated cost of about $130 million.

Some stats behind the building itself.  There are over 16,000 aquatic animals.  It has the longest underwater viewing tunnel in North America.  Over 5.7 million litres of water and 100 interactive opportunities.  There are three touch exhibits which include horseshoe crabs, sharks and rays.

There are currently 9 exhibits, Canadian Waters, Rainbow Reef, Dangerous Lagoon, Discovery Centre, The Gallery, Ray Bay, Planet Jellies, Life Support Systems and Shoreline Gallery.  I'm going to talk about the Dangerous Lagoon which I thought was the most interesting exhibit.  The Dangerous Lagoon is an underwater tunnel where you are in a tunnel underneath the water and you constantly have fish and animals swimming up and around you.  The tunnel has a moving conveyor belt if you want to just relax and soak it in or you can walk along the tunnel and stop as you like.  It was pretty neat, there were probably about 4 sharks in the tank, along with stingrays and even sea turtles.

The website says it takes 2 to 2.5 hours to finish but when we went, it took us roughly 1.5 hours.  Our tickets were for 9:00 am and at this time, it was fairly empty, we didn't have issues with getting up close to exhibits or taking pictures but by the time we left at around 10:30 am, the place was a zoo.  So do try to go earlier if you can.  The website has suggested hours to avoid.