Today, we head to two castles, Neuschwanstein and Linderhof. We got up early and left the hotel at 7:00am and stopped at the grocery store for breakfast and lunch. 8,60 €got us two lunch sandwiches and two snacks for breakfast.

We woke up early so that we would hopefully avoid the crowds at Neuschwanstein which is our first stop. Unfortunately due to rain, we didn't take as many pictures at Neuschwanstein since we left it to Allison's waterproof camera. Pictures are not allowed inside Neuschwanstein. I would estimate that it took 2.5 hours to get from the parking lot (via bus), do the tour, and get back down (via bus) and back to the parking lot again. We arrived at the parking lot at around 9:40am and the next available tour started at 11:10am, it seemed like they have plenty of tours, so I don't think you need to book ahead of time. You have the option from the ticket office to take a horse-drawn carriage up, a bus, or hike up. We opted for the bus which cost us 2,60 € round trip which doesn't get you to the front entrance (no option does), and there is a short walk to get to the castle from the stop

The tour lasted about 30 minutes long and it goes through the completed rooms within the castle and it seems like there weren't that many for a castle as large as it is. The ones that you do get to see are pretty impressive and the tour goes from boring rooms to nice rooms, which is a nice flow since you don't want to see a grand room and just be shown something dull at the end. It was interesting to see just how crazy and ambitious King Ludwig II was. We left the area at around 1:30pm and had our lunch sandwiches in the car and headed off to Linderhof after. Parking was by the hour and cost us 6
€. While I didn't like the tour since our tour guide wasn't very good (he spoke before everyone gathered, quickly talked about a room and scrambled to the next one), I thought the castle was very neat to see and worth a visit if you can. The pacing is very quick though since there are a lot of tours scheduled and we were constantly waiting for the group ahead or being followed by the group behind us.

Linderhof was roughly one hour away from Neuschwanstein and is another of Ludwig II's palaces. There is a nice lake with great views along the way which we stopped for pictures and a small break. We arrived at around 3:00pm. It cost us 2,50 € to park. We took the guided tour of Linderhof and in my opinion, this was a much better tour than Neuschwanstein. The castle is complete and you could see all the rooms and the tour guide was very informative about the castle and took things slow and explained every room and answered every question. We wandered around to the different parts of the palace grounds (which is free to see) and got a tour of the grotto which was neat and just goes to show how insane he was. He built an indoor grotto with an indoor lake with a boat, working lights and an indoor controllable waterfall.

Our castle tour started at 3:20pm which goes through the upper levels of the castle (there isn't much to see on the main floor). The tour lasted about 30 minutes. No pictures allowed inside Linderhof.

After the castle tour, we went to the grotto to do the tour which started at 4:05pm. There is a steer climb up, so prepare yourself. The tour is very short, I'd say 5 minutes long. You walk inside and you suddenly feel like you have gone into a cave, except it is all man made. The tour guide goes through the grotto and tells us about how it was constructed and what function it served. They show the different lighting systems and in the end concluded the tour by starting the indoor waterfall. It was really neat to see this and I'd suggest coming if just to see how far someone went to recreate this.

After the grotto tour was completed, we spent the rest of our time taking pictures on the palace grounds. They have a very nice set of gardens here with a big fountain which we happened to catch (it only operates at certain times). When we were done, we had a snack at the shop downstairs by the parking lot (which wasn't bad and relatively inexpensive for a shop by a tourist site) and headed back to the grocery store for dinner.

I drove back and the experience on the autobahn is an odd one. The autobahn has sections that have no speed limit, so you can drive as quickly or slowly (I think) as you like. So I'm cruising along and I noticed that even driving at 150 km/hr, I was still being passed by significantly faster cars. In the end, I hit 200 with our minivan (I expected higher, but that's okay). 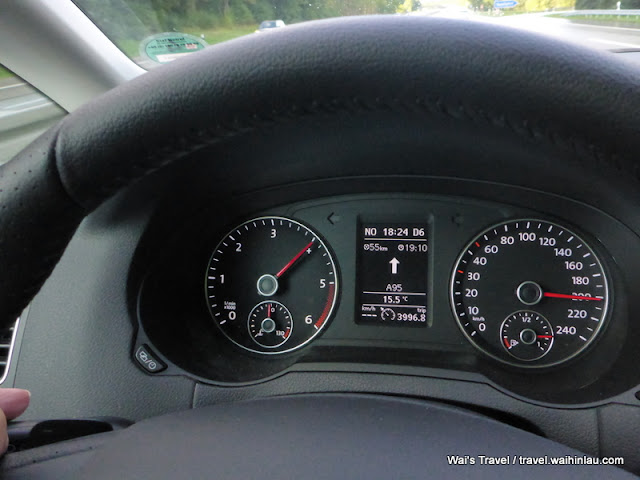 Dinner at the local grocery store was pasta for us. 9,90 € got us two pasta dishes which weren't bad. They were reheated sauce (on a stove top) and pasta, so not fresh, but expected from a grocery store.

Tomorrow, we head to the BMW museum to go do the grand tour of the museum, welt, and plant.
Posted by Wai at 7:00 AM