Today was our first late morning since I wanted to do the BMW museum premium tour which didn't start until 11:15am. We had breakfast the hotel again this morning but we got smarter and ordered eggs and specialty coffee from the waitress which were included.

We arrived at BMW welt at around 10:15am but unfortunately tickets were already sold out for the premium tour, so we just wandered the welt and the museum. If you are interested, you might want to book ahead since we didn't. The welt is free, the museum costs 10 €. It took us 3 hours to do both, and we left at 1:15pm. The museum is well worth it. The welt on the other hand felt like a glorified showroom. We spent probably two hours at the museum and an hour at the welt. This included lots of pictures at both. The museum gave me a greater appreciation for BMW. It talks about their history, where they came from, vehicles that they've made, and they have lots of galleries that show their old vehicles and showed how they changed.

Next up is Nymphenburg palace. We arrived at around 1:45pm and had our sandwiches in the car and went in after. We did the museum, porcelain museum, amalienburg, pagodaburg, and maximilian. These all have a cost to them (included with our 14-day pass), but the grounds are free to visit and parking is free as well. It is up to you to decide if it is worth the cost to visit the sites. Personally, I think they were neat to see and they were different, but they did not live up to expectations. The grounds however are really impressive, given up how massive the site is and you can just wander around and enjoy your day. In my opinion, Neuschwanstein and Linderhof had better interior areas, and I would say that Linderhof and Nymphenburg both have very nice exteriors (I'm referring to the castle, gardens and grounds as a whole). 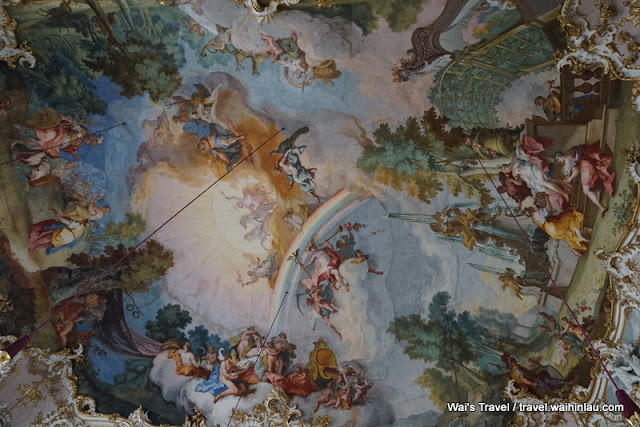 Augustiner brau munchen is where we stopped for dinner, a restaurant near Nymphenburg. We knew we weren't in tourist land anymore since they did not have English menus nor did they really know how to translate what they have. Tracey and I played it safe while Allison got a mystery pork dish. It actually turned out to be a bacon stuff pork lion with onions and it was the tastiest of the bunch. I guess we should've been more adventurous!

Tomorrow, we visit Dachau, a concentration camp, return the car, and head to Salzburg by train in the afternoon.
Posted by Wai at 7:00 AM