Today, we have half a day left in Vienna before we head to Budapest by train.

Our hotel, Hotel Graf Stadion, was okay. The room is a bit smaller than I'm used to but the service and breakfast were fine. The room may be a bit noisy for some since we always heard garbage trucks in the morning. The location is very convenient with easy walking distance to train stops and main attractions. I would have no problem recommending the hotel as long as you aren't a light sleeper. Note that this hotel also doesn't have a tub.

I think we were in Vienna for a half day too long, if we left this morning, I think it would have been a good duration. Bear in mind that we didn't really visit any of the museums that are in Vienna. With our spare half day, we went to Prater, which is a 24 hour amusement park that is free to visit and you just pay for activities there. The main point of the visit would be to visit the ferris wheel that they have which is over 100 years old. It costs 9,50 ‎€ to go up and includes a few dioramas that were neat to see. We got to Prater slightly before 10:00am and left at 11:30am. Prater is easily accessible, just get off at Praterstern and walk towards the ferris wheel. The amusement park itself is really old and the age shows, you can see this from the rides that they have and the arcade machines that they have. I wouldn't go out of my way to visit, but if you have some free time, it isn't a bad option.

When we finished, we stopped by a sausage stand at the front gate. It was very good for street meat. 3,90 ‎€ for most sausages and you can to pick the type. They cut off the end a baguette, use a metal tool to cram all the bread into the end and stuff the sausages into the newly created hole instead of cutting it in half like we are used to. I would definitely recommend trying it at least to see how they make it.

After Prater, we wandered back to the main square and went to McDonald's to regroup and determine what to do in Budapest since we initially decided against going but in the end decided to. When we finished, we headed to the train station and went to Budapest in 3 hours without issue.

Our hotel in Budapest is Budavar Pension, which has a very nice view of the parliament building. Make sure to follow the instructions given by Viktor since we walked the long way. This hotel includes breakfast, so I hope to see what it is like tomorrow.

Dinner was at Pizza Eataliano, where we ordered the fungi pizza, benevento salad, and gnocchi pasta to share. It cost us 10,000 Ft and they gave us a coupon for 10% off future visits. The food was really good and they are open late, however, like a lot of places we have been to, the service is lacking. We were sent to the highest floor (3rd) for some reason, where the waiter only comes by occasionally. The salad was the highlight for me and with the coupon, we may just come back. 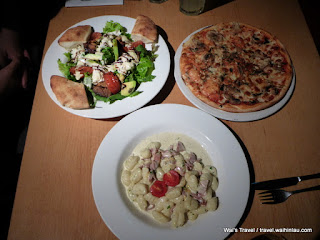 Tomorrow, we plan to do our outdoor sights since the forecast calls for rain everyday after tomorrow.
Posted by Wai at 7:00 AM