Due to the rainy forecast for the next two days, we decided to do our outdoor sights today which is Janos Hill.

Our breakfast was a smaller version of the breakfasts that we have been having in the past. Few meats, one cheese, three types of bread, hard boiled eggs, coffee, tea, juice, cereal, fresh fruit and some yogurt. This hotel is actually more like a bed and breakfast. The innkeeper is only present in the morning and when guests are expected to arrive (you need to coordinate) since he is not there all the time. Due to this, the breakfast served is actually a lot nicer than expected.

We got some information from Viktor and we were off. Based on the information that Viktor gave us, we should take the cog railway and then the children’s railway to get to Janos Hill. Yes, that’s right, a children’s railway. We walked to the cog railway which is located near a park and costs the same price as a regular train ticket here. There is actually a ticket box just outside where you can purchase the tickets (electronic, no person to assist you but it is in English). It costs 350 Ft for 1 ticket or 3,000 Ft for 10 tickets, we opted for 10 since I was sure that we would use 9 which is still a discount even if we didn’t use the last one.

The cog railway arrived at 10:30am and we took it to the last top (about 20 minutes) and we made it just in time for the children’s railway which is a short walk from the station. I don’t remember the specific directions, but I believe there was only one way to go and you can’t miss the children’s railway. Don’t wander because the children’s railway only operates once an hour and for us, it goes at 3 minutes after the hour (11:03am in our case). It cost 700 Ft for one way or 1,400 Ft for a round trip ticket and since we were planning on taking the chairlift back, we only purchased one way tickets.

The children’s railway is called this because there are children that volunteer to do certain tasks such as directing trains (yes, but there is only the children’s railway on the line), validating tickets and a few other things. I thought it was cute to see little children trying to be like adults although they were pretty timid and did not really speak English. Make sure to ask for which stop to get off at (I forget the name), but it is not the last stop and took us also another 20 minutes to get to. There is still a bit of a hike (maybe 10-15 minutes) of uphill climbing after. There is only one direction, so you can’t get lost. When we got off the train, there were a bunch of other people getting off as well, so we knew that we must be at the right place.

After our climb and we arrived at our destination, to our dismay, we found out that we were at the top of the hill already and would only take the chairlift down. If you are looking at the chairlift building, to the left, there is a walkway, go up this and you will get to a lookout tower that gives you nice views of Budapest and it is free! Unfortunately it was a bit hazy when we went but it was a nice stop nonetheless.

With the lookout tower finished, we walked back to the chairlift and had a snack at the café. We got the hamburger and hot dog and neither were good and I would suggest just avoiding it completely and get something when you get to the bottom.

The chairlift cost 1,000 Ft one way or 1,400 Ft for a roundtrip ticket. We only got the one way ticket since we were heading back to town after. Once on the chairlift, we realized that it was probably best that we didn’t do a roundtrip chairlift since there is nothing to see on the way up. By the time we left, it was 1:00pm. Once at the base, we took the local bus and headed back into the city.

Once we reached the last bus stop, we got off and decided to walk to Buda Castle. While walking there, I got hungry and we stopped at a random Chinese restaurant for lunch. I don’t know if the girls were hungry or not, but I was since the hamburger was a disappointment. The food was surprisingly good and it only cost us 800 Ft for a two item combo. 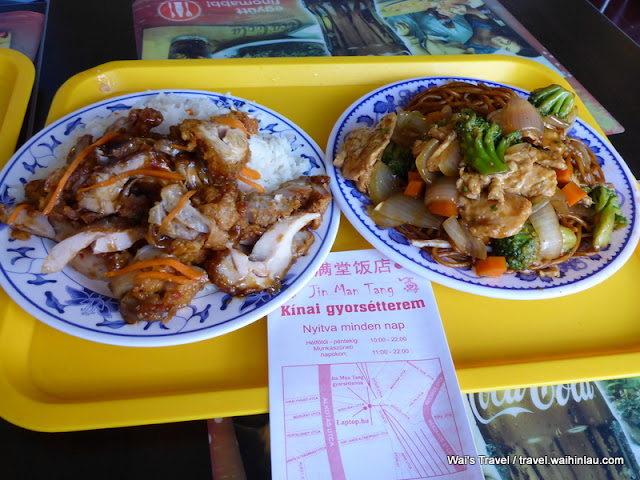 We made it to the Buda Castle funicular at around 3:00pm. We were initially going to take the funicular but deterred by the huge line up, we walked up the trail and headed to Fisherman’s Bastion first. It takes maybe 10-15 minutes to walk up, time depends on how much time you spend looking around and taking pictures. There are multiple paths up, and if you are lost, just ask someone.

We took some pictures and while up there, we also headed to the National Gallery for pictures. When we were finished, it was 4:40pm. This was with us not entering any of the buildings, just viewing them from the outside since they all had costs to go in them although I’m not sure how much they cost since we weren’t interested enough to pay to go in them.

With Buda Castle and National Gallery finished, we headed back down to the base to try a langos at a shop right by the funicular based on Allison's brother's suggestion. It reminds me of a beaver tail but with a little saltiness to it. We ordered the peach jam one and it was okay. Cost us 1,000 Ft and it was freshly made. 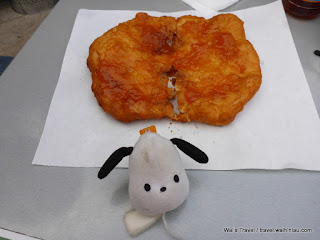 We went back to the hotel for a rest and determine where to have dinner and Hunyadi was the restaurant that we decided on, a short walk from our hotel. Tonight, we got the veal cheeks, cat fish, and pork medallions. The veal cheeks reminds me of the goulash that we have been having in Austria. The pork medallions were a bit chewy, and the cat fish had a tomato and parika sauce which Allison enjoyed. Service was included in the bill at 15%. The service however was actually what I normally expected, so that’s fine, however, it is the first time I have been forced to pay it since it was on the bill already and we only had 3 people at the table. I don’t know if I would suggest the restaurant based on this principle. The drinks are a rip off. I swear, they must have been under 250 ml size glasses of pop. Cost us 12,730 Ft.

With dinner completed, we all agreed that if we wanted to see the city at night, we should do it today since it was going to rain the next few days we were here. Due to how windy it was, we didn’t get any good pictures like we did for Vienna, but it was nice. We did end up walking to the bridge that was north of the Chain Bridge and that was a mistake. There isn’t really anything to see there and we were all pretty tired by the end. You do however get to see parliament, Chain Bridge, National Gallery and Fisherman’s Bastion all in one picture from there (which I didn't get any good pictures of unfortunately).

Tomorrow, we plan to visit the city centre and try a thermal bath if possible.
Posted by Wai at 7:00 AM