During Labour Day long weekend, from Sept 5 - 7, we decided to visit Pittsburgh.

Our first stop is lunch at Cloud 9 in Erie, Pennsylvania. After a long drive, it was good to get out and have lunch and stretch our legs a bit. We arrived at around 12pm and were the only ones there the whole time. We both ordered the half salad and half sandwich combo which were only $10 each! You get to choose from the lunch salad and lunch sandwich which there were a handful to choose from. I got the C9 Chef Salad with the Meatball Sub sandwich and Allison got the Peach Tree Salad with the Lamb Bacon sandwich (not on their website for some reason).

I thought overall, the food was good, the service was okay. I much preferred Allison's Peach Tree salad and Lamb Bacon sandwich although I thought the lamb bacon sandwich was a bit salty. I'd come back if I was in the area. Note that street parking is free on weekends.
Our first attraction stop is the Tom Ridge Environmental Center for a quick walk. It is a neat stop if you want to learn about nature but I was only there for the tower. It is free to visit, so it may be worth it if you have young ones who like to learn about nature and wildlife. Personally, I wouldn't stop here if you are adults. The tower was okay, but there really wasn't much to see since the center is actually surrounded by an amusement park with water slides and roller coasters. It seemed very out of place. Because of this, I decided that we should just skip the bicentennial tower, which I initially planned to visit, and headed to our next destination, the Linesville Spillway.

What is at Linesville Spillway that is worth a stop? Well, supposedly this place is so full of carp that it is possible to witness 'ducks walking on fish' because of how densely packed the fish are when people throw bread to feed them. While I did enjoy the stop, it wasn't anywhere near how densely packed the pictures made it seem, but it was still a good stop. There are a good amount of people and a truck that sell bread to folks who don't bring their own. The folks here were really friendly and even offered up two loaves of bread for us to feed the fish with. We probably stopped here for about 20 minutes. The spillway itself is by the bridge, just south of the little shop and the parking lots. I think this is a great stop for kids who are old enough to throw bread. It is free to visit and park your car with plenty of parking spaces when we arrived at around 2pm.

While driving to the spillway we passed Hank's frozen custard shop and we stopped here for a snack after the spillway even though I initially had this stop as when we head back to Toronto. We ordered the regular sized special which was a strawberry sundae with pretzels this weekend. It cost $4.30 and it comes with two scoops of frozen custard, strawberry sauce and a lot of pretzels. I thought this was a great treat for a hot day. The regular size, in my opinion, is enough to share between two people. The place has been around since 1952, a testament to the quality of their treats. 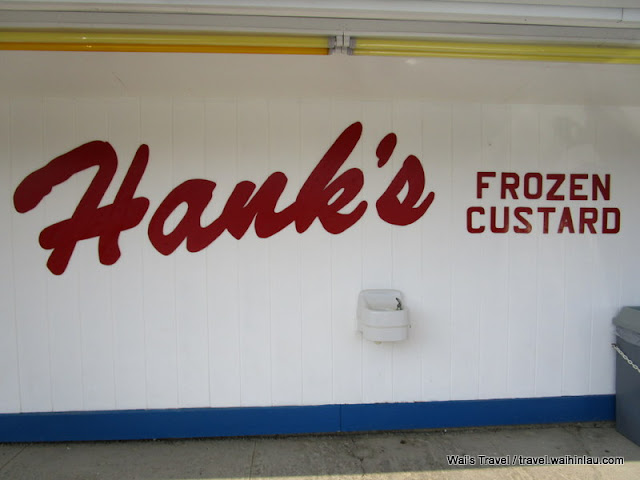 Then, we drove the remainder of the way to Pittsburgh, about 1.5 hours and we tried to head to Fat Head's next for dinner, but it was pouring by the time we arrived and since we didn't have an umbrella, we didn't end up going and decided to head to the hotel and check-in instead. Holiday Inn at Greentree is where we stayed and I think that location is okay. I personally don't have issues with it being a bit further from the downtown area, but you do need to drive since it is a bit out of the way. They do offer a free shuttle though if you are interested. We tried to go to Central Grille but didn't end up finding it so we ended up going back to Fat Head's and after a 30 minute wait, we finally go seated and ordered right away. The food arrived quickly and it was very good. $12 got us a sandwich that is roughly the size of your head and a generous portion of chips. I was able to make it through the sandwich but left 1/4 of the bread and I didn't make a dent out of the chips at all. It is very big and very filling but also very tasty. I'd recommend stopping by if you get a chance. They do have a lot of specialty beers here as well.

After dinner, we were initially going to go visit the incline to see the city at night but decided to call it a day and that we would try it again tomorrow.  Our plan tomorrow is to visit the Nationality Rooms and the Carnegie Museums and the incline (both during the daytime and nighttime).

Come back tomorrow for day 2 of our Pittsburgh Labour Day weekend trip!
Posted by Wai at 7:00 AM