The plan today is to visit the slides at Jacques-Cartier Park in the morning, Rideau Hall at 11am and wander around in the afternoon.

Breakfast was nice, I actually forgot what was included besides the take out bag and the breakfast sandwiches. There were also hashbrowns (a bit salty for me), yogurt, juice, Nespresso machine, regular coffee, various bagels, muffins, toast, eggs, and waffles. The best part for me is a toss up between the breakfast sandwiches and the takeout bags. The takeout bags include a water, granola bar, apple, oatmeal cookies and a mint. I like that they make good snack bags so I don't need to hunt for things while wandering the city.

After breakfast we decided to visit the slides at Jacques-Cartier Park which is in Gatineau, Quebec, a short drive or shuttle ride and we got there by 10am. The place was very empty when we got there and we were able to quickly do all the slides that we wanted and not having to line up makes the experience that much better since it was really cold out (-30 before windchill). We did the group slide twice, the solo slide once and we did the tube slide twice before leaving roughly 20 minutes later.

We had to leave early since I had planned to visit Rideau Hall at 11am and they said that we should be there 10 minutes before. Parking is free and available all along MacKay St, it is a short walk to get to Rideau Hall. The tour is free, but you need to call to make a reservation and it lasts roughly 1 hour. Rideau Hall is where the Governor General lives and it was a neat building to visit. The guided tour starts with a security check, so make sure to have all metal items available for inspection. Pictures are allowed and there are some neat areas inside. By the end of the tour, you get a better understanding of the building and the history behind the Governor General and their role within the Canadian Government. I would suggest coming if you have the time. It also isn't too far from Byward Market, about a 30 minute walk. 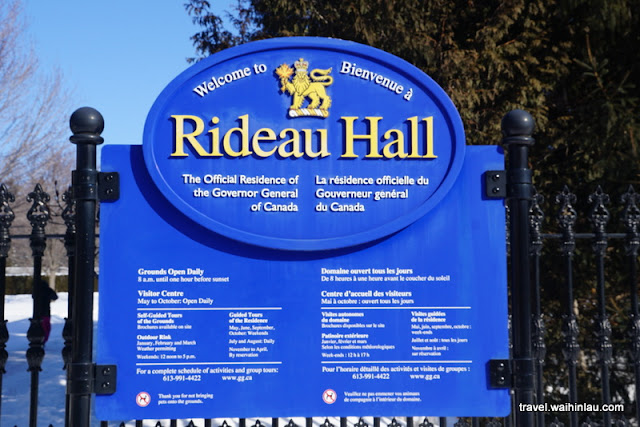 Shawarma Palace was where we went for lunch, a short drive from Rideau Hall. There is parking available on premise, however, I ended up parking on Augusta St which is right next to it anyways. Lunch was one chicken shawarma plate and one falal wrap and between us, we finished the wrap and had about 20% of the plate left before we stopped. It was a lot of food. The plate includes hummus, salad, potatoes, rice, shawarma and pita. The food is good, however, I think that there is a better shawarma restaurant that is near Rideau Centre that I liked more from last time. There is a lot of seating available here. We arrived at around 12:20pm and it was pretty busy there but no issues finding a spot.

After food, we went back to the hotel and rested since I was having a bit of a food coma and napped for about an hour. We headed back to Confederation Park for some more freebies of coffee, tea, cookies, and marshmallow as well as a Goodlife grocery bag. Wandered to the Rideau Canal and took some pictures, however we did not brave the weather and skipped out on skating today and would try again tomorrow.

Dinner was at Fiazza Fresh Fired Pizza which reminds me of Famoso in Toronto but with less non-pizza options. There were only two types of salad and the other option is pizza. The ingredient list seems better than Famoso but the cost adds up quick if you want to make your own. We ended up ordering two pizzas from their pre-made list which was the Capri Pesto (pesto and red sauce blend, goat cheese, roasted red peppers, artichokes, olives, and Fiazza cheese blend) and the Bella Prosciutto (prosciutto & arugula (after fired), alfredo & red sauce mix, blue cheese, rosemary, and Fiazza cheese blend) and a ginger beer. The food was good, no complaints there, my issue is that they converted it from a serve yourself restaurant to a full service restaurant for Valentine's Day weekend. I understand the purpose, however, they were really under-staffed for it. They had one hostess and one server for the entire restaurant which looked like would sit at least 50 people. The pizza makers seemed under-staffed when they received a bunch of orders for tables of 8+ people. Overall, I think the food is worth the visit, but maybe not for a special occasion. Bella Prosciutto was $12.95, and Capri Pesto was $10.95.

On our walk back, we saw The Cupcake Lounge and stopped by for two cupcakes, one strawberry champagne and one key lime. We walked back to the hotel and called it a night. The cupcakes were okay. They were a bit deceptive since it looks like a lot of frosting but it actually is like a muffin with a bit of frosting on top. Nothing wrong with them but I expected more frosting than cupcake.

Tomorrow, we will visit the Mint for a tour and have lunch before heading back to Toronto.
Posted by Wai at 7:00 AM