If you have watched or know a bit about Pompeii, you will probably know a bit about Mount Vesuvius. Mount Vesuvius is an active volcano that had an eruption in 79 AD that wiped out Pompeii and Herculaneum among other settlements. With a currently elevation of 1,281 m (4,203 ft) which is subject to change due to future eruptions. The big eruption in 79 AD created a cloud of stones, ash and fumes that had a height of 33 km (20.5 mi)! 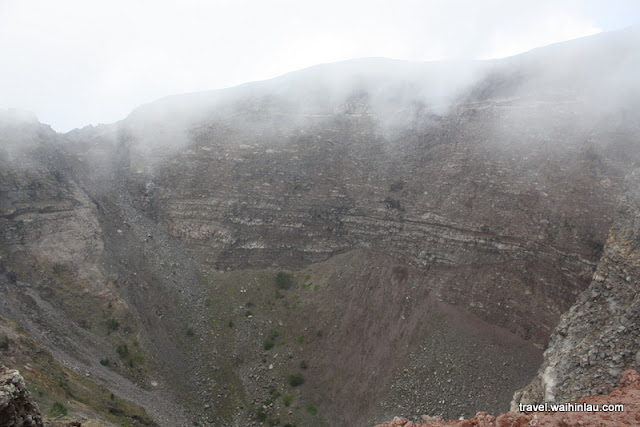 Today, it is still an active volcano with the last eruption occurring in 1944. It makes you wonder why people would still live nearby if it has happened in the past. While we visited Italy, we stopped by to visit both Mount Vesuvius and Pompeii on the same day. Mount Vesuvius is reachable by taking a tour that starts at the Pompei Scavi train stop. Exit the train station and to the left, there should be a booth there that sells tickets to go up and a bus if you are lucky and you don't need to wait. In 2013 it cost us 22 € and this includes the ride up, admission, and a brief explanation of Mount Vesuvius when you get to the top. Note that this tour includes a bus ride up a private trail and part way up, you switch to a military looking truck with monster truck size wheels on it, I guess to help get up the mountain. It was a neat experience. 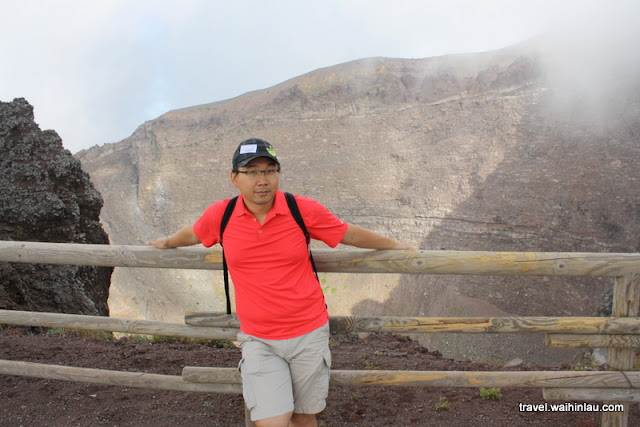 The entire tours lasts about 3 hours with 1.5 hours for getting up and down the mountain. When you reach the top to get dropped off, you aren't actually at the top, there is still a 15 minute trek to get there. So, 1.5 hours + 0.5 hours leaves you with about 1 hour at the top. I thought it was enough time when I went but you may want more time if you want to see more and take in more pictures. We walked from end to end (at least the portions that were possible for us). 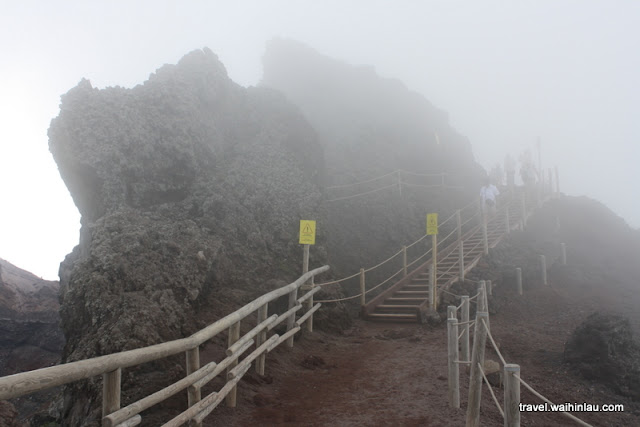 Overall, a very nice experience and I would suggest doing it. It was also neat that the volcano was actually covered by the clouds at the base and when you get to the top, it was exactly like that. You could only see cloud after a certain distance, after that, it was like walking in Silent Hill, it is just white. This unfortunately meant that we didn't get to see too much of the surrounding landscape while at the top, but there were no problems with looking at the volcano in its entirety while there. It was neat that you could actually see steam coming out of it, but it didn't look like your usual volcano with the flowing lava in the middle, it was actually covered with what looked like dirt and it actually had some plant life growing there.

During our trip to Rome, we visited Ostia Antica since we had some extra time while we were in Rome and it was found as a potential day trip from Rome and I would say is worthwhile if you don't plan to visit Pompeii, maybe it is worth it to visit it INSTEAD of Pompei. It may not quite have the same level of historical important and popularity, but I felt that due to its location, it provides us, as tourist, a much better idea of how things were in the past. 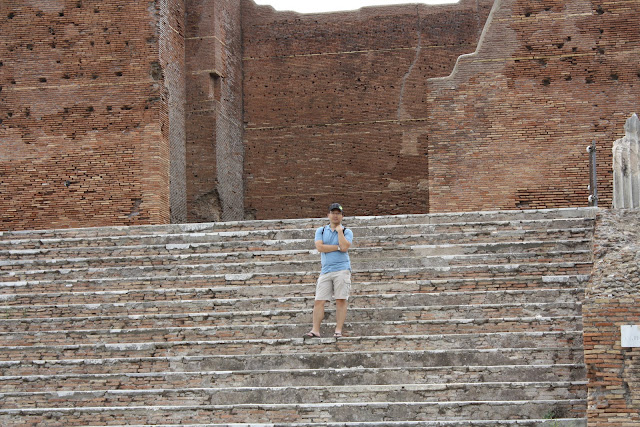 How so? Well, while it is similar to Pompeii, there are SIGNIFICANTLY less tourists. By this, I mean there was at least a 1:50 ratio, and so, if you want to just wander and explore at your leisure without tourists disrupting your enjoyment whether it is taking in the scenery or taking pictures with less/no people in the background, it is entirely possible to do so here. If you try this in Pompeii, it will be impossible. 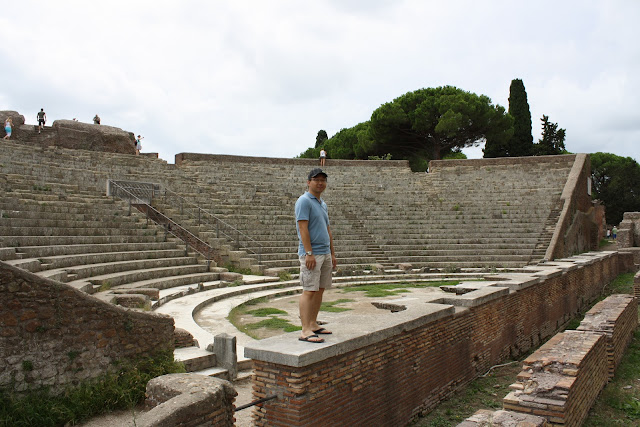 Ostia means 'mouth' in Latin and it is next to the river Tiber which meant that it is at the mouth of Tiber. Antica means 'ancient'. Ostia Antica is said to have been established in 7th century BC with most of the currently visible buildings being from 3rd century BC. Given how old the buildings are, it is quite surprising how well they seem to be kept to this day. 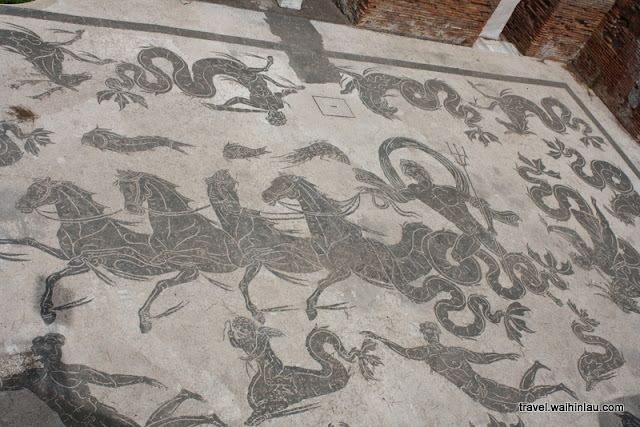 It was made primarily as a naval base due to its location but when the importance of a naval base lessened, it became a commercial harbour where people would come here for trade. This would explain all the houses, what appears to be shops and even the amphitheater that they have. 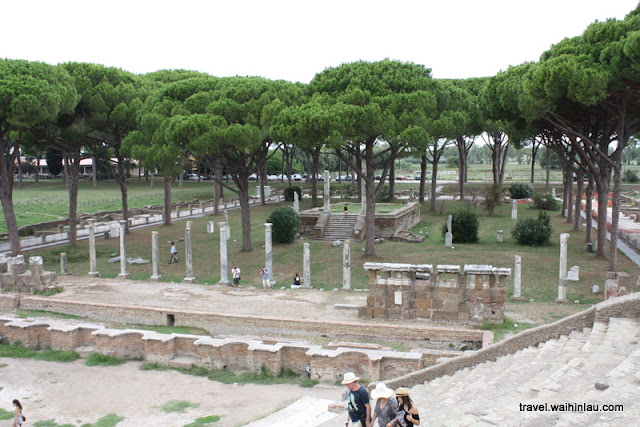 To get here from Rome, get to the Piramide station which is located on Metro Line B. Exit the metro and go up at the north end of the tracks, at your left you'll see another set of train tracks, this is for the ROMA-LIDO train. Take this to the Ostia Antica station which should take roughly 30 minutes and it is just a short walk from there station. There is a pedestrian bridge to cross and it should be fairly easy to s

Come back next Friday for another Past Point of Interest!
Posted by Wai at 9:00 AM No comments:

During our trip to Salzburg, we visited Hellbrunn Palace (Schloss Hellbrunn in German) which is known for its trick fountains and in general, a nice park and palace grounds. 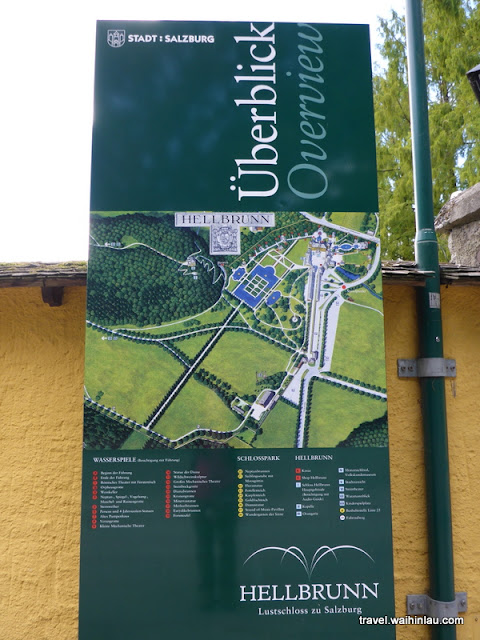 Built between 1613 and 1615 by Markus Sittikus von Hohenems, Prince-Archbishop of Salzburg. The original palace was just the three yellow buildings that you see, everything else (the palace grounds, the trick fountain area) were all built later.

The trick fountains are what draws most people here and when you come, you will understand why. For a small fee, you get a roughly 40 minute tour of the trick fountains and you will walk through the entire section and understand what trick fountains actually means. This archbishop created areas which would delight guests and when they aren't paying attention, splash some water at them from secret areas where it isn't obvious that you, as a guest, would get wet.

Located in Hellbrunn Palace is the Sound of Music Pavilion which looks like a covered pegoda. This is not the original location, it was actually moved from Leopoldskron Palace which is another Sound of Music sight that you can visit if you like while in Salzburg. It is interesting to note that, The Sound of Music which is well known in the west is not actually known here except for the tour guides that know about it. At the Sound of Music sights, I noticed that it tended to be the ladies who were lining up and being very excited to reenact certain scenes from the movies while the guys would be holding the purses and taking pictures or video as needed.

Hellbrunn Palace is easily accessible by local transit (much like a lot of other attractions). You take Line 25 to Hellbrunn station and it is a short walk from there.

For more information, visit the official site at http://www.hellbrunn.at/en/

During Winterlude we paid a visit to Rideau Hall in Ottawa, Ontario, Canada. They offer tours here daily and all you need to do is call and make a reservation. The tours are free, available in English or French and lasts roughly one hour. Free street parking is available on MacKay St. Photography is permitted and there is a security clearance check that you need to go through before entering the premise. 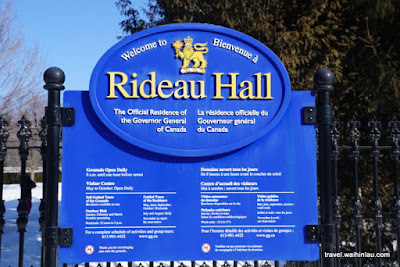 Rideau Hall is where the each governor general resides since 1867. The property is very large (79 acres) considering the building itself doesn't even take up 10%. What does the governor general do? Well, I didn't know either, but they are the representative of the Canadian monarch which happens to be Queen Elizabeth II at the time of this post. The governor general is actually selected and the process and requirements are interesting. 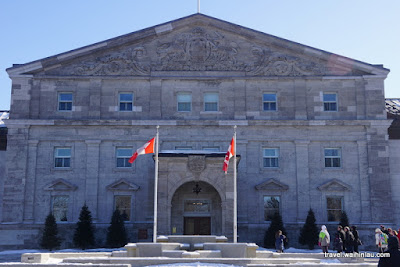 I thought it was a neat tour and while it is a bit out of the way if you don't have a car, I feel that it is important to learn a bit about the history of the location and a bit about the Canadian government. I would go through some of the things about the building and the history, but I feel that the tour guide did a very good job and I'd rather not repeat everything that you would learn (then you wouldn't need to go!). 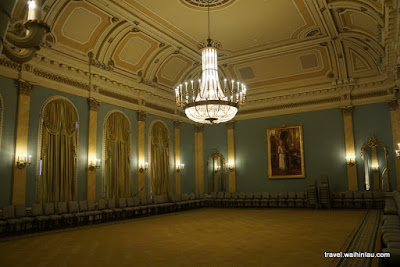 If you are in the area and have some free time, it's a neat and free educational stop. I'm not sure that I would come back, however, I was told that they have a skating rink there which we missed while there, not that we would have gone since it was really cold. 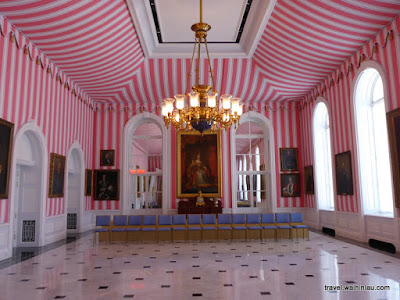