Today we begin our 4 day roadtrip to Washington, DC from Thursday March 24 to Sunday March 27. We rented a minivan with Costco Travel this time which was the cheapest option and good to know for any future roadtrips and we booked a place in Columbia Heights area for our stay from AirBnB. This trip will be with Mike, Seiji, Harold, Sue, Allison, and myself.

Our initial departure got delayed due to freezing rain the previous night and we ended up beginning at around 5:00am instead of 4:00am and we ended up leaving at 5:30am once everyone was together and after our first pit stop at McDonald's. While Mike took the first driving shift, I fell asleep, but apparently hwy 401 was really bad and we didn't make it to the border until 8:00am. The border was quick, there were no other cars in front of us. The border officer asked a lot of questions, but in the end, we went with no issues. 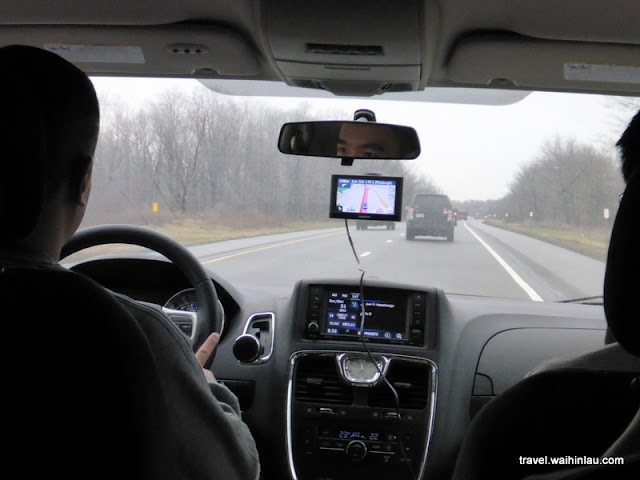 Bob Evans was where we ended up at for breakfast at 10:30am in Erie, Pennsylvania. The food was nothing special, I would likely not return here. Service was a bit slow, but I guess somewhat expected for a table of 6. During breakfast, we decided to go to Grove City Premium Outlets instead of Leesburg since we were nearby and it would mean that we could take a break now versus continuing our long drive to Washington.

We arrived at Grove City at around 12:30pm and walked around until 2:30pm. The mall was not very busy and the deals were normal and not that great in my opinion. Everyone but Seiji and myself got something there. This is our third time here and I think we may not visit again (or we are just unlucky and never find much here).

With a brief stop at a McDonald's to try their mozzarella sticks (which were surprisingly good for $1.19 USD), we made it to the AirBnB location in Columbia Heights at roughly 8:10pm. I noticed that this route had a lot of tolls which totaled $24.75 USD. This BnB was interesting since they operate with a lockbox and we never saw the owners at all. They gave us the code and we were good to go. The place was nice, three floors with three rooms and two bathrooms. Surprisingly one of the few streets with free street parking in the area and it is a short 10 minute walk to the nearest Metro station.

After we settled down, we decided on a place for dinner nearby, which unfortunately did not have seating and we ended up at The Red Hen for dinner. We ordered the sweet potato hummus bruschetta, the saffron paccheri with duck leg regu, and the wild mushroom. The mushrooms were really nice, the bruschetta was okay although too much cheese in my opinion and the paccheri was okay. It was cooked well but I don't think I like al dente that much, however the duck ragu was nice. We got to the restaurant at 9:30pm and finished by 10:30pm, fairly quick service. I would recommend it.

Headed to CVS after for some snacks and then the Jefferson memorial area for a peak at night. The places look nice but it would be a long day if we continued, so we called it a night and decided to try to come back out at night on another night. We ended up back at the BnB at 12am making it a really long day. The drive to Washington wasn't too bad, however, driving within Washington is pretty bad. Bring a good GPS because the street lines don't really make sense to me. It was very difficult to drive around, it is doable, but it would drive me crazy along with everyone else. On a side note, the roundabouts here actually have LIGHTS in them, what's the point of having a roundabout at all?

Tomorrow, we visit the National Mall area and see what we can and finish up the following day with the things that we missed.
Posted by Wai at 7:00 AM