This weekend is my bachelor party weekend in Montreal, where we leave on Friday morning and return on Sunday evening. This time, it is with the guys and the ones who made it are Mike, Seiji, Harold, and Mario. We picked up our large SUV (Nissan Pathfinder) last night since they didn't have any minivans available. This was unfortunate since the trunk space for the Pathfinder is actually pretty bad if you have ANY luggage at all. But we made due since it is a 7 seater, so we just used the extra space for our stuff.

We began at 9:00am and rounded up everyone by around 10:30am after a quick bite at McDonald's and we were off. We didn't really hit any traffic until we were close to Montreal which was nice. We had one break stop and a gas stop and made it at around 5:00pm. Remember that there is usually constructions in Quebec, so be aware. Also, gas seems cheaper in Ontario, so fill up before crossing over.

Since we didn't really eat on the way in, we stopped for a small bite at Frites Alore which specialize in fries and poutine. We ordered a large fry, three sauces, and two poutines (one General Tao and one duck). The food was quick to come and it was good, I thought that they were a bit cheap on giving gravy and curds, but the duck poutine I thought was pretty good. 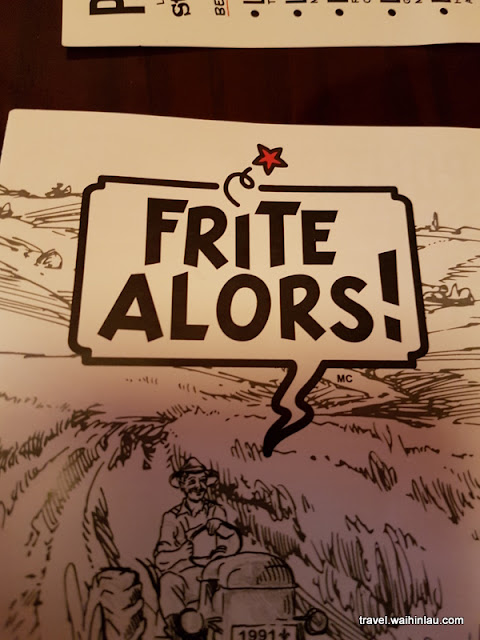 We had a later dinner planned at 9:00pm and with the Raptors' playing Game 6 tonight (3-2), we went to a nearby sports bar and had two pitchers while watching the game. I don't watch the game much, but when you watch it with a group, I totally understand why people would do this with others around. Having people cheer or boo and complain adds a lot to the sports watching experience compared to when it is just myself and I am not a big sports fan. At half-time, we had to leave for dinner and by then they were up by a few points, so it sucked that we couldn't finish watching the game.

Dinner was at Moishes which is the local steakhouse which has been there since 1938 and they have a 3-hour happy hour from 9:00pm to 12:00am where you can get an appetizer, a main, and a coffee/tea for only $25! You can add a side for $5, making it a full course meal for only $30. I ordered the salmon tartare, the rib steak, and the potato. Everything was really good. At this price, it is hard to beat for the portion sizes that you get (the rib steak was surprisingly big). Don't forget that you also get free bread, pickles, and coleslaw (and man, the coleslaw was really good here). By the time we left the restaurant, we found out that the Raptors lost. Oh well, onto Game 7 on Sunday!

After dinner we headed to Randolph Pub Ludique, a board game cafe, and we played Sheriff of Nottingham. In SoN, everyone takes turns being the sheriff and you are basically like border patrol, everyone else will take turns telling you what they are bringing over and you need to determine if they are lying or not. If they are, you as the sheriff was charge they a fine, if they are telling the truth, you owe them money for wasting their time. We don't do this often anymore, so it was fun. The place closes at 2:00am, so, it is a pretty lively city to be in if you are a night owl.

With our game done, we got back to the hotel and went to visit the casino. Parking is free, but the GPS got us lost again, so it took longer than necessary to get there. We wandered around and played a few games there. There was free pop, coffee, or tea if you want while there. It is multiple floors and the building is quite nice, although I did not understand the layout, so a map would have been nice, just so that I knew where everything was. It was a bad experience for me when I realized that since I don't play the games often, I forget what the rules are, and the board is only in French, no English, so it was impossible to play anything unless it was something that required no reading. We were here for about 45 minutes before we left.

Headed back to the hotel after and called it a night. It was pretty late by this point (probably 3:30am), tomorrow, we visit some churches and more eating!
Posted by Wai at 7:00 AM