When you go to Lima, you should try to make it to El Circuito Magico del Agua (or the Magic Water Circuit). It is a water park that holds 13 water fountains, costs only 4 soles and holds the Guiness World Record for 'World's Largest Fountain Complex in a Public Park'.

If you are there during the evenings, there is a laser show there. Unfortunately, it is just a fountain that acts like a screen and a projector shows a show against it with music. Allison thought it would be like the Bellagio and was disappointed and I was disappointed because it would be 30 minutes long and I kept thinking it would improve as it went. 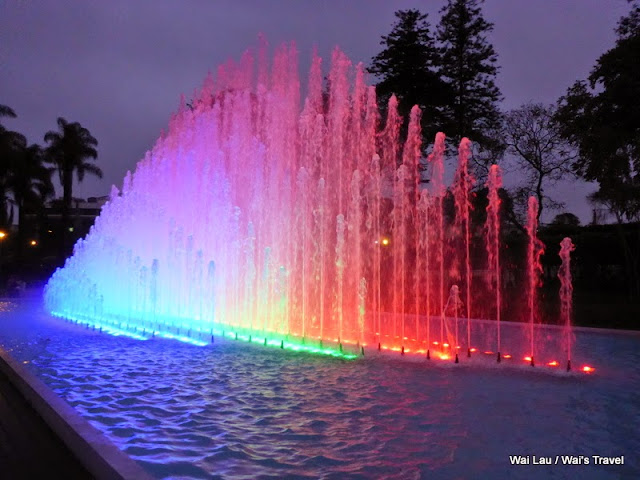 For the price, I think it is definitely worth checking out if you have the time to do so. There are some really cool looking fountains and exhibit-type shows, have a look at some of our photos to determine whether or not it is for you. Make sure to where some water-proof/resistant clothing because you will likely get a little bit wet.

I know that my previous posts have been a bit short, so you have been warned that this will be significantly longer! 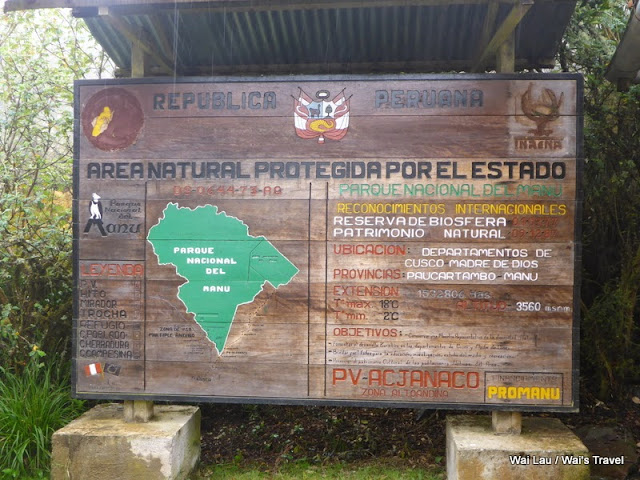 The Amazon Rainforest is something that we debated about during our trip to Peru. It wasn't a debate of whether we should do it or not but how long we should go for and which location. Since we were going to be in Cuzco since we were doing the Machu Picchu hike, we ended up starting from Cuzco (Quito was an option but we would have to fly there). From there, there are a variety of options in length which was from 3-days to several weeks long. We ended up deciding to do a 7-day tour and our tour provider was Pantiacolla. When we did this in 2014, it cost us $1,290 USD and this covered 7 breakfasts, 7 lunches, 7 snacks, and 6 dinners, all transportation and accommodations were included as well as a private guide throughout the entire tour. 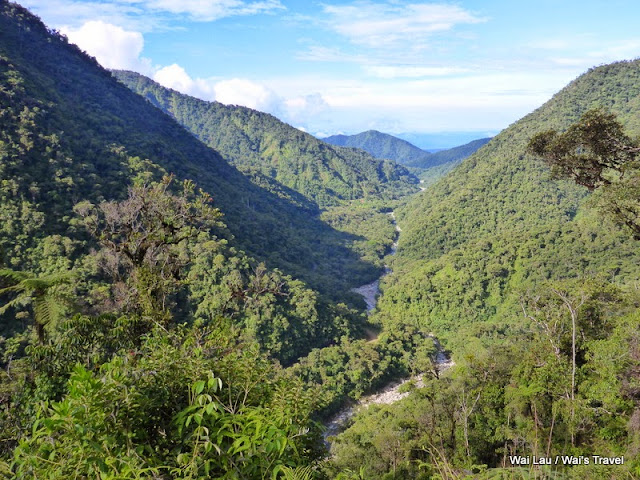 Let me tell you, going through the Amazon is not what I expected. Oftentimes I find that we get lured into going somewhere due to feedback from other people and photos that other people have taken. In this case, if you look at Pantiacolla's pictures, you would imagine that you would see tons of wildlife ranging from monkeys, birds and going up to crocodiles and jaguars. However, in reality, you realize that you will be guaranteed to see lots of birds, anything else is likely a bonus. I'll explain more about what we see later. 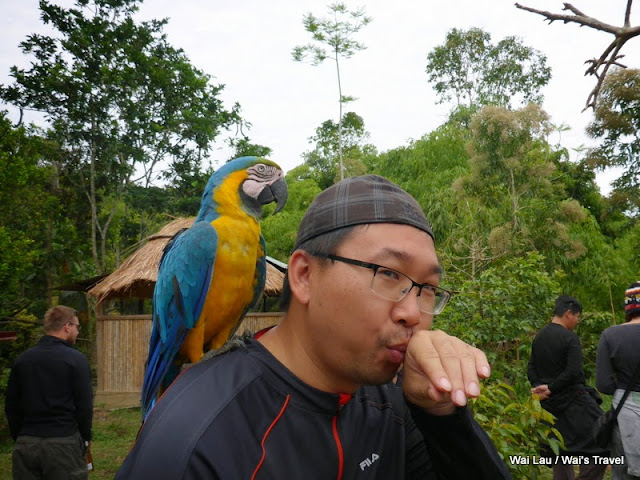 During this trip, it was Allison, Sharon and myself. Sharon opted for the 3-day tour and Allison and I did the 7-day tour. Based on what we saw when Sharon had the left the group to go back to Cuzco, I can say that it was probably disappointing. Based on the 7-day tour, I feel that we had a good experience of what the Manu Amazon Rainforest had to offer. While we did not get to see everything that we had hoped for, there is no doubt that it was worth the experience. 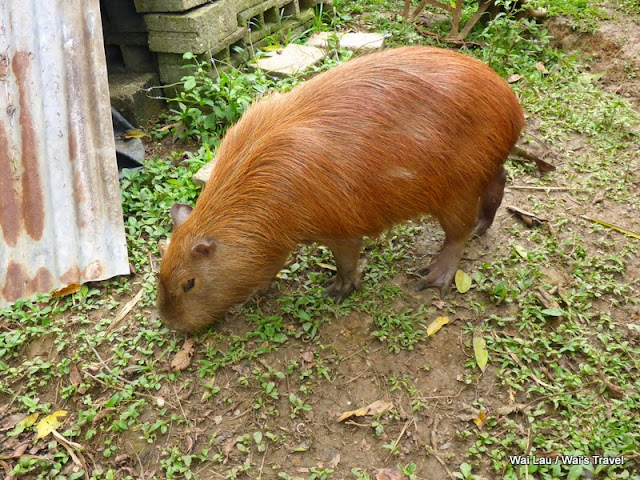 Our itinerary was as follows: 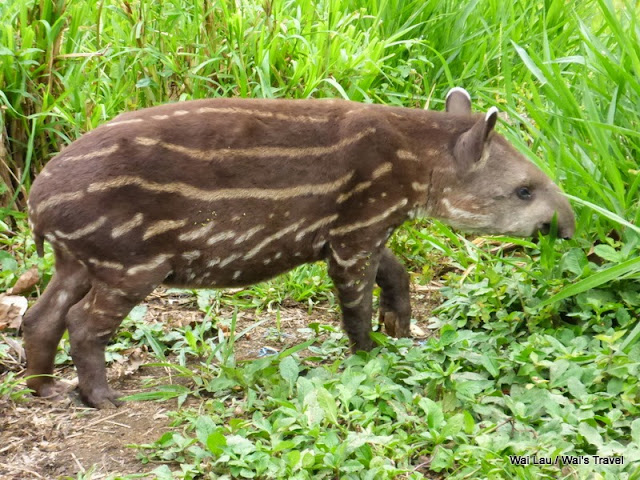 Based on the description, you can see that you will be on a boat for a long time and I don't think having a long tour really changes how long they are. My understanding is that Pantiacolla owns some lodges and has some shared ones that they use and they are far apart. So even if you do a long tour, it just means that you will have more days where you stay at a lodge versus moving every other day. 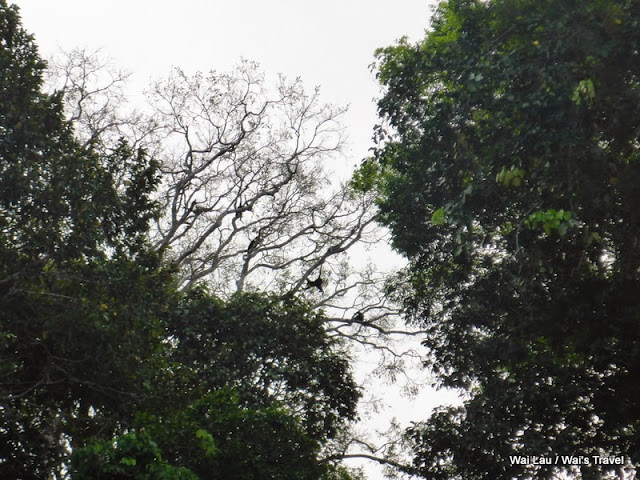 During the last day of the tour, you end up at the macaw clay lick and this was unbelievable in my mind. I am almost willing to say that this was worth the tour itself. The sounds and sights were just unbelievable. It might have to do with how much or little wildlife we had seen by then, but it was just an utter joy to watch as hundreds of macaws would come to this clay lick to eat. 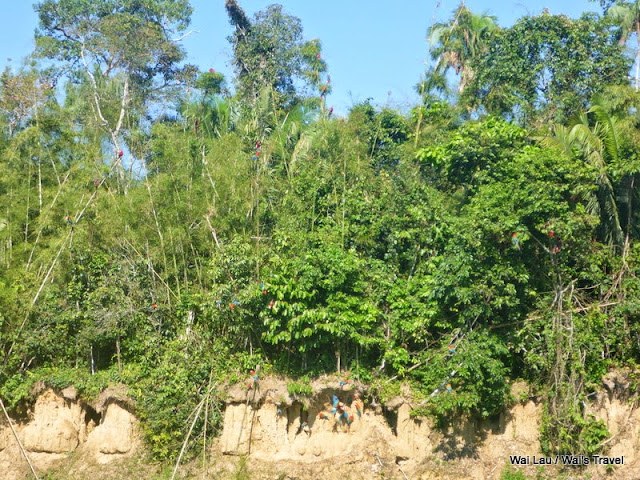 Overall, I really enjoyed the Amazon Rainforest, the ups far outweigh the downs for me in my mind. The long travel times I think are essential for keeping the Amazon Rainforest as pristine as possible. Basically outside of the beginning, there are no roads, all paths are just worn travels that are well used, the docks for keeping our boat there is really just a stick that is on the boat that the driver drives down into the mud of the base and hope it doesn't float away. It may sound a bit rugged for some, but I feel that it would lose it's magic if you paved over parts of it and made an airport or such so that tourists can easily access it. Visit it if possible while things are still as they are.

Hallstatt, one of the destinations that we have been to, but while it is very pretty to look at, it makes me wonder why the world has such a fascination with this spot. It is so popular that there is an actual replica created in China! Mind you, I do think that it is a very nice looking town, we didn't really get to wander around to take in the sights there, so maybe we missed out. Since we were on limited time, we just found the spots to take the iconic pictures and pretty much left. 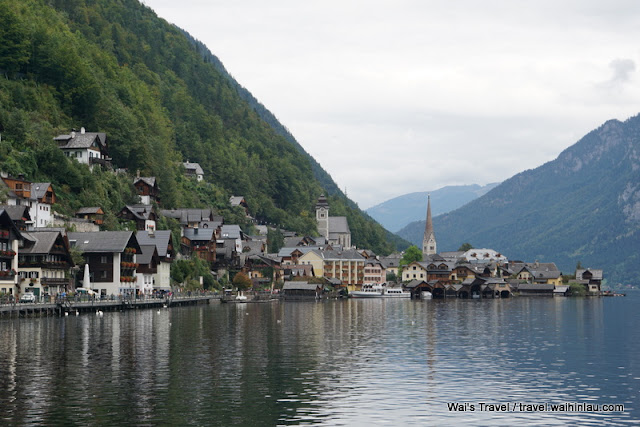 We paid Hallstatt a visit while doing our Eastern Europe trip and we were fortunate that we had a car to get there because it made for travelling a lot easier. I am told that there are tours that will take you there, so don't let not driving you discourage you from trying to go there. 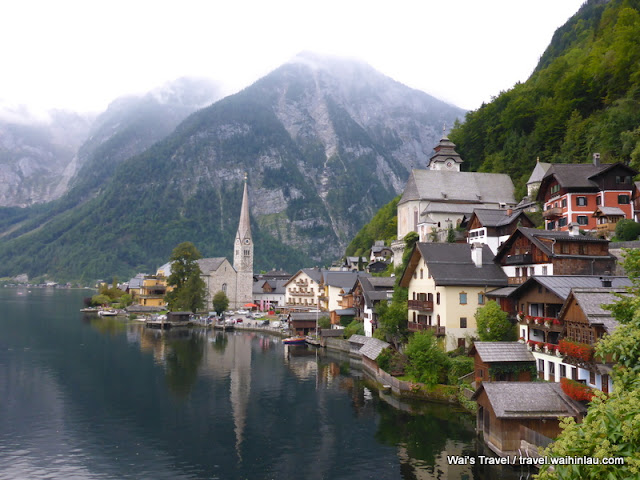 We happened to stop here because we were told that it is worth a stop and it happened to be part of the drive for the day when we were visiting Dachstein for the ice caves and Salzwelten, the local salt mine. 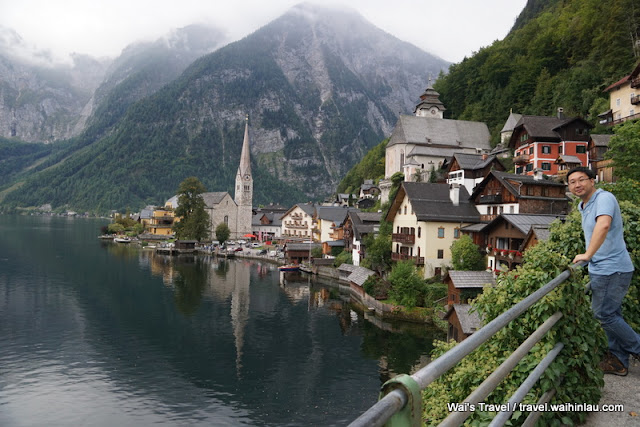 While I think it is a pretty sight, my appreciation for the place may be soured a bit by the fact that we didn't spend time there. My opinion might differ if we have time to wander around, but you can be the judge of how it looks based on some pictures we took and the large amount of pictures you will find online.

When I was looking up Hallstatt on Google Maps, there is actually a '明信片角度 / Classic Village Viewpoint / Postcard Angle' location! Wow!

This will be a bit different from my usual Past Points of Interest. Last week we got our wedding pictures back and I'm very happy with how they turned out. We had our ceremony at Kortright Centre for Conservation located in Vaughan which is the topic of my post today. 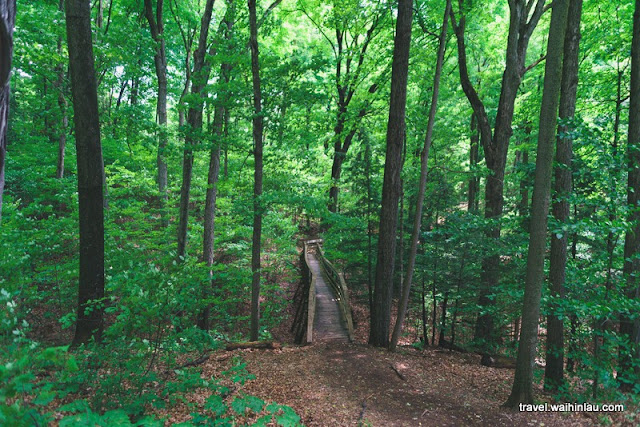 Kortright is open to the public and you just pay parking, walk to the visitor centre, ask for a map and go hiking! There are over 16km of self guided trails that are open all year around and it has some very nice looking spots for photos. When you drive in, you feel like you have left the city even though it is located in the heart of Vaughan, near Vaughan Mills and Canada's Wonderland. 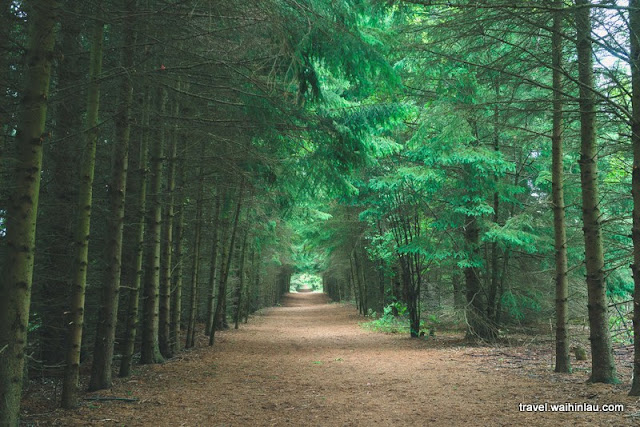 Just a short 10 minute walk from the parking lot, you will see various types of locations that provide for excellent photos. There are marshes, wooden paths, wooded paths, and open fields to name a few. 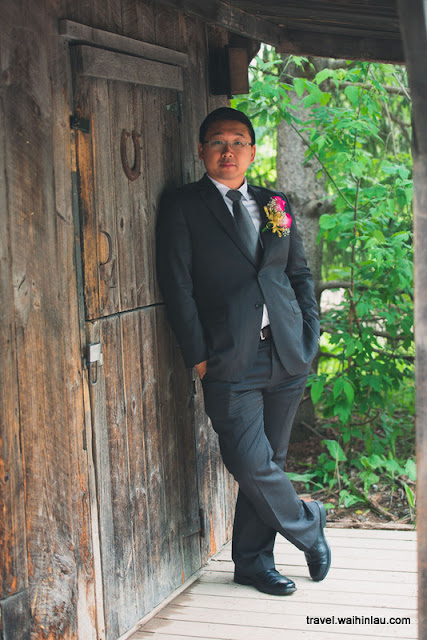 Kortright, which opened in 1979, is named after Dr. Francis H. Kortright, a world famous outdoorsman, author and conservationist. It consists of 325 hectares of woodlands, has 135,000 visitors annually and offers over 50 environmental education programs for schools. 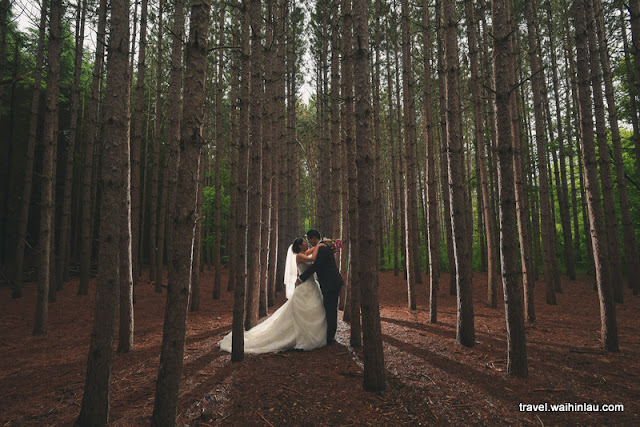 For more information, visit the official website at http://www.kortright.org/visitor-information/