Today, we do the boat cruise which has a bus picking us up from the hotel taking us to the port, from there, on a boat to the nearby island volcano, a swim in the local hot spring, a stop at Thirissia island and finishing off at Oia for sunset and a bus back to our hotel.

Breakfast was the same at the hotel, so I'll skip that part today. We woke up, ate and got ready for our bus ride to the port for our cruise. While we got there pretty early (we were the first people onboard the ship), it was clear that we weren't the only people since we were only one coach bus load and we ended up waiting for other buses to arrive which ended up taking about an hour for this to happened. I wonder if something happened that caused this issue or if that was the actual scheduled departure time.

Anyways, onboard the ship, they do sell drinks and snacks if you want. Food is not included with the cruise and the sandwiches look a bit depressing, so, bring your own food. We were told that the stop at Thirissia which would have restaurants would be at approximately 2:00pm.

First stop, volcano! My second volcano visit, the first being Vesuvius in Italy, and it was very different. For one, it is an island instead of being on land. You'll see various types of rocks and rock formations, and even changes in colour. With the cruise, the tour guide does provide us with a lot of information about the volcano, how it came to be, what the surrounding area used to be like and more. Our guide also dug out a small hole in the ground and if you felt it, it was actually REALLY hot. By dug, I mean she literally scooped out maybe two handfuls of rock and if you left your hand there, you would probably burn yourself.

The guide took up most of our time unfortunately, which left very little free time for exploration and pictures. There isn't a lot to explore, but it was a bit disappointing that we only had roughly 15 minutes of free time before we had to head back to the ship. The guide was very good at making sure that she had rounded up most of her guests, although it would likely be impossible to make sure everyone has returned since there were over 100 guests on the ship.

Second stop, hot springs! This part was on Allison's radar, until we realized that it wasn't an actual stop. Let me explain. The hot spring isn't the type that you normally thing of where there is a pool surrounded by land and you just walk into it. The ship actually stops NEAR the hot spring and you need to swim to it and they said that it is a 50m swim but that seems like a low estimate, it seemed much further than that. If you aren't a good swimmer, it was advised that you don't try it. Note, don't wear light swimming outfits since they will come back stained due to the high sulfur contain. There were plenty of people jumping in and doing it, although they mostly came back and said that it wasn't as hot as expected. We just stand on the ship and relaxed. Also, the ship is only partially covered, so expect that you might be sitting out in the open sun the entire time.

Third stop, Thirissia! By now, we were starving and ended up getting a snack at the gyro stop right by the dock, it was 3 euros, a bit more expensive than normal, but not crazy expensive. With our growling stomachs calmed, we decided to walk up the steps to see what Thirissia had to offer. Honestly, it is a very long and tiring walk. I didn't think it would be too bad since it looked similar to the hike in Amoudi Bay, but I think a combination of the time of day (it was around 2:00pm) and the fact that it was hot with no breeze made it very tiring for us. 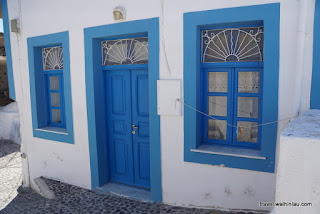 Ended up at Different Snack Bar for snack #2. Ordered the octopus, and fried cheese. The octopus was very nicely cooked and tender, not chewy at all. The fried cheese was too salty. Also got some drinks and it came out to 19 euros. The shop seemed like a family run business where two of the kids were helping out, a boy and a girl. The girl was very cute and was trying to assist all the time, running around with a tray and offering to take things from guests even if they had nothing to return. It had a nice view of the surrounding area as well.

The stop at Thirissia was for 2.5 hours, so there was plenty of time. However, if you don't plan on hiking up the steps, there is very little to do by the docks. And the only way up is by hiking up the steps. I would guess that the hike up is similar to Amoudi Bay (70-100m or 230-330 feet). As from the shops there, we saw that some people were just lounging by the water.

Fourth and final stop, Oia! Once we docked and were off the boat, the tour guide told us when/where to meet and we were free to explore and it was around 6:00pm at that time with a meet up time of 8:35pm by the big church square. Since we were here the day before, we knew where it was, but it isn't too hard to find. By now, we were fairly tired of all the hiking and guess what, we had to do another one! Either hike up the long and tall set of stairs or pay for a donkey. I know that Allison seemed really tired and wanted to ride a donkey (which cost 5 euros) but I convinced her to walk up with me. We ended up getting to the top before the donkeys did!

Anyways, dinner was at Lotza and we ordered the mussel saganki, oias pasta and pork in a clay pot. The food was good, view was okay since we weren't by the edge and the bill came out to 40 euros.

Tomorrow, we have the morning in Santorini before we head to Crete, the second island of Greece we plan to visit before heading to Athens for our final leg of this trip.
Posted by Wai at 7:00 AM