Wednesday, September 20, 2017. Today, we will be driving as far down Hwy 1 as we can, do the 17-mile drive, and then maybe see some of the tech giants here before heading to San Francisco.

Our hotel, Days Inn, included breakfast which consisted of cereal, bread, a waffle maker, yogurt, coffee, tea, and juice. It wasn't bad, it was a good change since we have stayed without breakfast for a number of days now.

We left at around 8:00am so that we wouldn't encounter too much of a crowd and our first stop was Cannery Row which seems like their old fishery area converted to shops and restaurants. It's a nice area, although nothing was open when we were there.

At 8:30am, we drove down to Big Sur and there are a bunch of really nice lookouts. I can see why it is so popular of a drive to do. Originally, we were planning on driving along Hwy 1 the entire way, however, there was a landslide at Big Sur which prevented us from doing the drive.

There are plenty of lookouts, so you don't really need to worry about where to stop and you'll definitely notice that you should stop when you see a bunch of cars parked along the side.

17-mile drive is actually quite nice. Originally, I didn't want to do it since there was a cost for entry and Allison mentioned that there are no stop-offs when she was researching online, however, I'm glad we did this drive. You are told to follow the red line on the road which takes you through along the 17-mile drive to see the points of interest (there are 21 points of interest).

We saw some wildlife while here as well. We saw an otter, lots of cormorants (you'll notice these as birds that rest on rocks with their wings spread out), more pelicans (there are so many here), lots of seals (I think?).

The main point of interest is probably the lone cypress which looks interesting, but really isn't much else to see here. Personally, I enjoyed seeing the coastline. And oddly, still can't believe how much of a drought there is here where some people can afford to pay to have green golf courses when it is surrounded by brown grass.

Lunch was at Carl Jr's which I saw many of, but didn't know if it was any good. It was surprisingly cheap and okay food-wise. There was a grumpy old man behind us talking about how we like our phones more than talking to each other (it was odd, since we normally use our photo to take pictures of our food).

With that finished, the tech giants is up next! We drove to Apple and was disappointed that there is no visitor center that I found. Apparently, we did read up about this, but it wasn't there (or we were at the wrong place). We noticed that they do have a shop here, but there is nothing exclusive here.

Google was next and we found the land sculptures which was really neat. Allison didn't know the history behind the land sculptures until I told her about them but I knew that she would enjoy taking pictures with them. Ended up taking a 10 minute survey for a $10 gift card at the gift shop there. Ended up getting a Google Mug for a $3 after the $10 gift card which is a nice souvenir.

Facebook was next and there is nothing to take a picture of outside of the thumbs up sign. A bit disappointing again.

Made it to our hotel on Lombard at 8:00pm, the traffic in San Francisco is really bad from 5:00pm to 8:00pm (I'm not sure if it is worse before or after that time, but that's how long we were stuck in some traffic for). 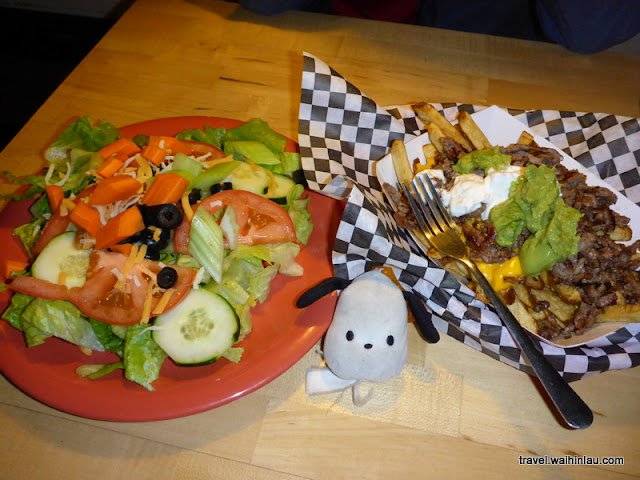 Dinner was at Original Buffalo Wings next door, where we ordered salad and fries (yup). The food was mediocre, wouldn't recommend it.

Tomorrow, we head to Alcatraz, explore Fisherman's Wharf, and eventually heading to dinner at Trestle.
Posted by Wai at 7:00 AM