Join us as we go through our trip that happened from May 9, 2018 to May 22, 2018 to visit Jordan. During this trip, we will be travelling with our friend Tracey (who came for our Eastern Europe trip) and we will visit Amman, Dead Sea, Petra, Wadi Rum, and Aqaba. 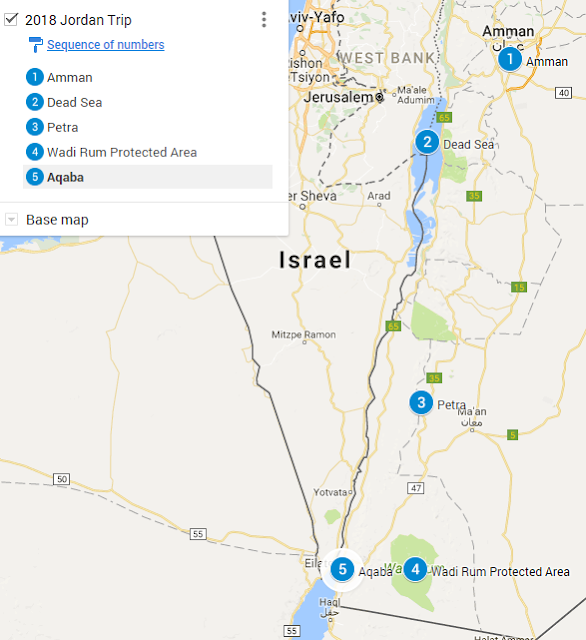 The Air Canada meals were okay. Nothing special. The salad is a mystery to me since I rarely see anyone eat them.

We were at Heathrow from 11:00am to 5:05pm. We had a snack there at one of the shops. It is actually a fairly big shopping area where everything is centrally located. However, everything seemed quite expensive since it was in British Pounds. Our next leg was with Royal Jordanian and surprisingly, you can't actually pick you seats for the flight until 3 hours before the flight takes place at the RJ booth. When we chatted with the lady there, we found out there was only one daily flight to Amman from Heathrow. I guess it isn't a very popular destination via Heathrow?

The Royal Jordanian meals were okay. The beef meal was actually good! The chicken was dry. The salad that is included has always confused me since it is always the worst thing included and I rarely see anyone actually eat it. RJ actually included actual metal cutlery!

The customs line was really short for us, maybe due to the timing of arrival. As Canadians, we are required to have a visa to travel to Jordan. We pre-bought our visa by getting the Jordan Pass online. The pass allows you to visit a majority of the Jordan sites for free and includes the cost of your visa as well as 1, 2, or 3 days in Petra (depending on which version you get).

We booked our car at the local Budget (which was our cheapest option by far), however, we had issues with having our Rogers/Fido credit card holding the security hold. We ended up using a different card at the end (maybe the amount was too high?). When we arrived, we realized that we forgot our international driver's license. Apparently, it isn't required which is odd since we read otherwise. Oh well! A 2018 Toyota Prius is our chariot for our trip (it would cost us roughly $600 CAD for 12 days). We ended up at the hotel at roughly 2:00am due to how long things took. Our hotel for the next 4 nights will be Toledo. Parking is included, however, it is only outside (which seems odd since I clearly see gates for an underground parking lot).

Tomorrow, we wander Amman depending on how well we sleep.

Breakfast is included with our stay and it had a good variety of items. Sliced meats, eggs multiple ways, toasts, juices, lots of dips and cheeses, fafalel, and more.

We ended up leaving the hotel around 10:00am with a goal of just wandering the local area today. We finished the theater at around 12:00pm. After we got there, we realized that the trip back to the hotel would be rough since it was all uphill! The theater has some good views (not the first roman theater I've seen). Included with our Jordan Pass. We spent about 30 minutes here.

Jafra Cafe is where we went to for lunch where we ordered the tahini lamb, hummus fatteh, lamb fatteh, and salad. Total came out to 30 JD. The food was good, also just our first meal here.
Amman Citadel next (which was up the hill). It is a nice set of ruins with a nice view of the surrounding area. Spent about an hour here, also included in the Jordan Pass.

Did Rainbow St next which was a LONG walk and not worth it in the end since, there was nothing to see here other than restaurants. It might be because we didn't arrive in the evening, but we weren't going to stick around to find out. It was disappointing since it would be another long walk back to the hotel.

The King Mosque is actually right behind our hotel and that's where we went next. It is a nice mosque on the outside, but honestly, the interior was a bit of a letdown (although it was very large).

Dinner was at a small shop by the hotel. Only cost us 1 JD for a wrap per person. The food was okay.

Tomorrow, we visit the ruins near Amman (Jerash, Aljoun, and Umm Quays).
Posted by Wai at 7:00 AM