Sunday May 13, 2018. Today, we head to Dead Sea as our final destination with a stop-over at Madaba. 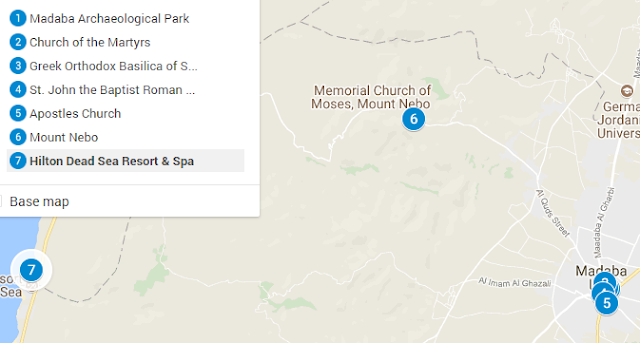 This morning, the breakfast actually did not have falafel, I wonder if it is due to the fact that it is a Sunday and there were a lot more people at the hotel compared to the previous days. A bit disappointing to say the least.

We left Toledo at 9:30am and arrived at the Madaba visitor center at 10:20am. This was the first place that we have seen a parking lot for tour buses and there were quite a few of them here. I guess it will be a bit more of a touristy area.

Our first stop after the visitor center was the Madaba Archaeological Park which has a lot of mosaics here. Admission is included with our Jordan Pass. It is fairly small, although looks fairly large on the map.

Second stop, the Saint John Church which has the oldest recorded map. It costs 1 JD to visit and worth it. It is a burnt palace which is fairly small, but it was actually built on top of a larger, older church which is how they found the mosaic.

Bawamit was where we went for lunch where we ordered the chicken, fatoush salad, grilled halloumi, and mixed grill which came out to 26 JD. The salad was good, but the other items were just okay.

The Shrine of the Beheading of Saint John The Baptist Church is well worth a visit. Cost 1 JD to visit and has a nice bell tower that you can climb with a great view of the surrounding area. There are actually two lookout platforms, however, the last one seemed to sketchy for us to climb and we opted out of that one.

The Apostles church has a really cool and large mosaic. A person there actually gave us an upclose experience where we were next to the mosaic itself. However, at the end, he expected a tip, a bit of an expectation at this point. When someone gives you something, expect that they want something in return. It is obviously up to you whether you want to tip them or not.

Mount Nebo is next and it is where you go to learn about Moses. The area has some nice views, and if you are interested in the history, it would be worthwhile to go with a guide, or just hang around a tour group. We had one that spoke English, so we just listened in for a bit. It costs 2 JD to visit. If you only want to see views, there are stop off points where you can just park your car and look out for free.

Our final destination is the Hilton Dead Sea Resort and Spa where we spend our late afternoon/evening for one night. After we checked in, the ladies were in a mad scramble to make it out to the Dead Sea to do the entire experience.

The Dead Sea experience involves you floating in the Dead Sea for 10 minutes, cover yourself in Dead Sea mud and wait for 15 minutes, and finally go back into the Dead Sea and rinse off the mud before a quick shower.

We ended up eating at 1312. The Hilton has several restaurants, but this is the one we settled on. Note, the area actually is just entirely made up of resorts, so your dining options will be fairly limited here.

Dinner was Fatoush with halloumi, shish tawook, beef tenderlion, and lamb ouzi. The total came out to 60 JD for everything (a bit high, but expected). The food overall was actually pretty good. We sat outside the restaurant for a sunrise evening with live music. It was a nice way to end the day.

Tomorrow, we drive to Petra for the Petra By Night experience and stay there for the next 4 nights.
Posted by Wai at 7:00 AM